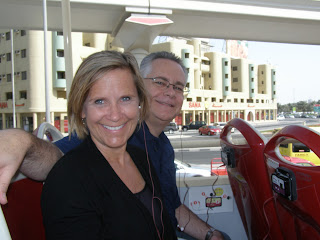 Come to Dubai: where you might view the horizon from the world's tallest building (if you can get tickets and if you can see the cityscape through the sand).  Visit the dolphinarium, underwater zoo, forts, museums.  Ride a camel, take a desert tour, play ice hockey, ice skating, sand bashing, dune buggy-ing.  Enjoy dhow, water taxi and bus rides, water and light shows, first run American and European movies.

And that's just day one. 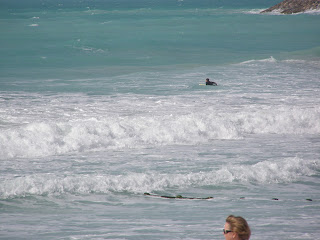 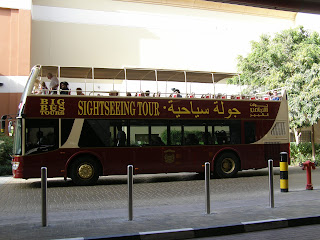 There is snow skiing in Dubai: 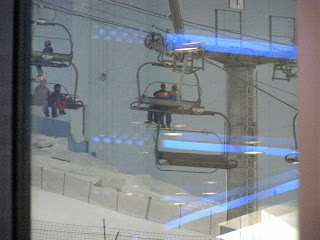 There is drinking in Dubai: 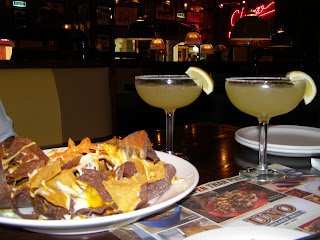 There is shopping in Dubai: 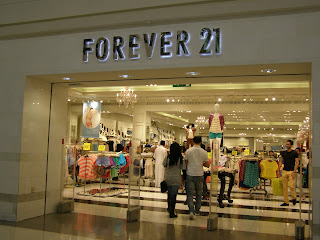 There is green in Dubai: 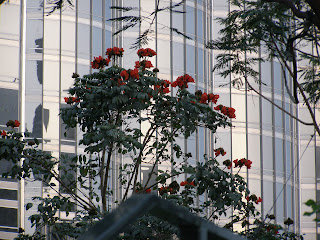 (According to the Big Red Bus's taped tour guide, Dubai has the highest water consumption in the world; it takes 250 million gallons of wet stuff a day to keep this desert city green.)

There are malls a-plenty in Dubai - with merry go rounds, amusement parks, zoos, restaurants, souks and more…indoors, out of the blazing equatorial(ish) heat.

You won't need a car to "do" Dubai, either: there's a clean, easy access New York style subway "Metro" - along with buses and taxis too.

…unless you're expecting to learn Arabic - or experience actual Middle Eastern culture, values and traditions.

According to a local source (and personal observation), only 20% of the people who live in Dubai are Emiratis.  The rest are from the Philippines (and maybe one or two other places.)  Sure, ads are in Arabic and English - but a lot of signs are in English only.  There are posted reminders to "please respect our traditions by covering your knees and shoulders" but people still dress in all manner of non-Islamic respecting ways: tube tops, shorts, flip flops…and those are the men.  Female tourists wear backless dresses and see-through skirts with sandals - which make it easier to recognize the prostitutes because they mostly wear high heels.

Oh, yes - there is prostitution in Dubai.  One website claims that after oil was discovered and foreigners poured into the country, locals kidnapped expat wives, used - and returned - them.  When foreigners, um…balked…at such practice, leadership thought again, and began importing women for said purpose  (http://www.dubai-information-site.com/prostitution-in-dubai.html).

If you're a pretty, young girl (ie, MY DAUGHTER), please don't "do Dubai" solo.

In truth, we did hear the call to prayer - once - piped into the mall.  We did see a few traditionally garbed families.  As in Doha, there is a cultural center in Dubai, tasked with sharing information about local customs and Islam. But really - why bother?  Dubai may be in the Middle East, but it's not "Middle Eastern." 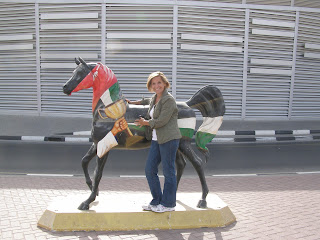 Great Blog. Loved the picture of Bob and you.