Qatar's Water: is it safe to drink? 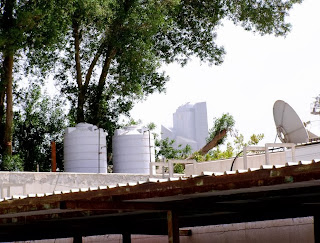 rooftop water tanks, business location overlooking Doha's West Bay
A 60-year old maintenance worker was cleaning inside a neighborhood water tank.  The ladder broke.  He fell:
"A dead body was found…inside a water reservoir at a residential building in Al Wakra, after residents there complained that murky water had been flowing through their faucets for at least two days…The water was smelling very bad - So bad that the smell spread throughout my house..."
dohanews.co
Qatar is a peninsula country, surrounded by water.  Lots and lots of water.  Yet clean, sweet, drinkable liquid is a precious commodity - for three primary reasons:
Location:  the country inhabits a desert near the hottest part of the planet.
Moisture:  Rain is rare.
Content:  the sea surrounding the country is very, very salty.
Salty enough to: 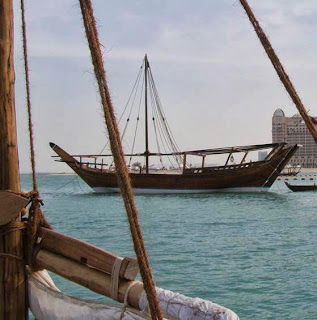 Once upon a time, Qataris were Bedouins who herded camels and goats in the desert.  They subsisted on camel milk, dates, imported rice and locally caught fish.  Fresh, sweet drinking water was shipped into the country from Bahrain.  Seafarers rationed potable liquid for long journeys into the Gulf, where pearl divers leapt into the sea as many as 100 times a day for months at a time.  The briny water burned hair off heads, dried skin, carved wrinkles into sun browned faces.


Then one day there was oil and gas.
And people.  From the West, East and everywhere in between.  With cars that needed roads to link neighborhoods full of buildings with kitchens, bathrooms, gardens, pets and vegetation.
All of which needed water.
It was quickly determined that the odd well, aquifer or country-to-country dhow service wouldn't satisfy the needs of the rapidly growing community.  A water treatment system was required.
Here's what I've learned about Qatar's water production and distribution system:
The country continues to rely on groundwater as well as recycled water (ie, "treated sewage effluent") for irrigation and other purposes, but desalinated (a process whereby the salt is removed from sea water) liquid is its primary resource for drinking water.  Since 1995 (when, coincidentally, former Emir Hamad bin Khalifa al Thani succeeded to power, expat population expanded and urbanization increased) use of desalinated water has tripled in Qatar.[1]


Desalination plants usually do not treat raw sea water, but "brackish water" or water drawn from alluvial wells near the sea.  It's lower in sodium content, has less organics, and is thus easier to treat.
- Curtis Gentile
In 1953, Qatar had five sea water desalination plants with a total capacity of 150040 gallons/day.  Today's plants have a capacity exceeding 327 MIGD ("million imperial gallons per day").[2]  The desalination plant at Ras Laffan opened 31 May 2011 and uses a "multi-effect distillation/thermal vapour compression" system.[3]  At the time it was the largest power and water plant in the country.
Doha's drinking water is primarily a bi-product of the gas-to-liquid conversion process at Ras Laffan.  Condensing the gas generates lots of heat, and raw sea water is pumped to the reactors for cooling. The sea water evaporates (boils) in the process, and the condensate is captured, treated and pumped to Doha through multiple water mains.  Pretty ingenious, huh?
- Curtis Gentile
In May 2013, development of a new sea water distillation plant began in Ras Abu Fontas.  The plant will produce 36 MIGD of desalinated water and is expected to open in 2015.[4]
Today Qatar rides the fast track to modern.  That means a place that little more than 60 years ago had one main street market now boasts high rise office buildings, apartments, villas, tennis courts and spas.  Residents live comfortably with electricity, cell phones, malls, Burger King, Kentucky Fried Chicken, flushing toilets, hot and cold running water, ice cream, lush gardens, a zoo and a water park.  Even the most rural desert bound tent dweller has a generator, internet and cable tv - with boxy air conditioners affixed to the canvas-like fabric. 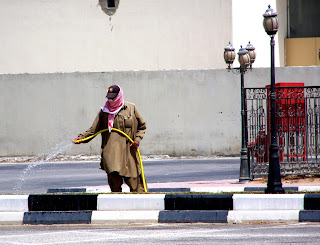 
In some areas, pipes carry fresh water from water treatment facilities to homes and businesses while a separate system of pipes carries waste away.  In locations where services haven't yet reached the neighborhood, a gravity fueled water tank provides potable water.  A convoy of trucks fill tanks with clean, sweet drinkable stuff while a separate system of trucks empty underground tanks of waste.

Sewage is stored temporarily in underground tanks before being sucked out with a Vac Truck.  Qatar does have waste water treatment plants. They don't yet have a comprehensive collection system (sewers, manholes, pump stations) to get the sewage there.
- Curtis Gentile 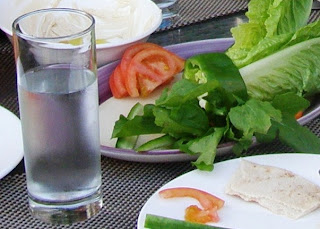 yum!
In 2011, Kahramaa (the country's water company) claimed that "Qatar may have the highest rate of water consumption in the world per capita, at 430 liters a day." [5]  Two years later, in January 2013, Qatar's Supreme Council of Health completed a study involving 3500 samples of Qatar's tap water.  With only traces of non-toxic dust and dirt the country's water was determined safe to drink. [6]
Distribution systems are often the source of water quality problems anywhere (not just Qatar). Qatar's water seems more susceptible to quality problems due to the many relatively small storage tanks located on the roofs of houses and buildings (baking in the sun).
- Curtis Gentile
While Bob and I do drink bottled water, we also fill mugs at the park, tip containers (glasses, coffee pots and ice cube trays) under the faucet and cup hands in the sink.  Generally speaking, Qatar's water is sweet, clean and safe to drink.
Unless it's brown and smells bad.  Then we don't drink it. 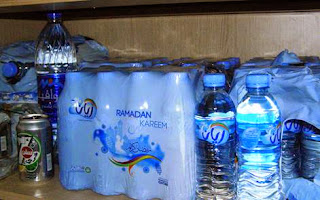 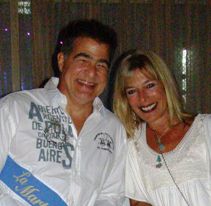 Curtis Gentile is a civil engineer with many years' experience in management of  projects involving water and power supply, waste water, storm water, flood management and more in a wide variety of locations, including Doha, Qatar.


Photo: the fabulous Curtis and Mary Gentile in Doha

Really, really, interesting. This post will take some study!

I have two questions: Who built their desalinization plants and how often is the water brown and bad smelling?

Very well done. Turn it into hard copy and submit it to Aaramco Magazine.
luv'nhugs
Dad

The plants are not necessarily built by the same group. The contract for the new plant was awarded to Mitsubishi Company. :) And...where we live (at the ultra nice "resort" called "The Pearl") the water has never been brown OR smelled bad.

And Aramco Magazine? We've subscribed to it for years and years --and this article seems made for it!