When I was 15 years old, thanks to my adventurous parents, Indiana Jones and Marian Ravenwood (aka Charles Hedrick and Peggy Hedrick), I lived in Cairo, Egypt - where the language of the street was Egyptian Arabic: 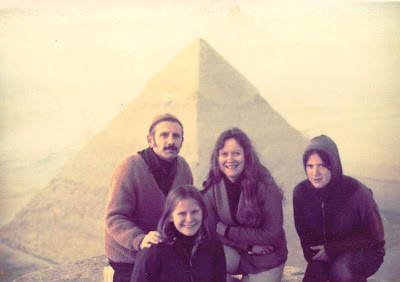 Indy, Marian, Kay and Cindi on top of the Great Pyramid, New Year's Day 1975
Minus brother Charles Hedrick, Jr. who slept in that morning (slacker!)
I jogged around the sphinx, visited Tut's tomb and sort-of-met Henry Kissinger. 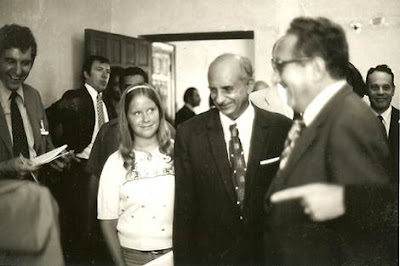 Most locals did not speak English.

Surrounded by the language, I learned to produce Arabic sounds like:
the hissing cat (khal - خ)
the gargle (ein -  ع)
choking-on-a-bone (ghein - غ).
Later, I returned to Cairo alone during a college year abroad and my Egyptian Arabic came right back.
So, relearning the language in  Doha should be easy, right?
Wrong.
There are two very distinct categories of Arabic:  "Street" Arabic, which encompasses a multi-bazillion number of dialects.  And Modern Standard Arabic, which is the language of the Koran, education and the foundation for all those multi-bazillion dialects.
"Street" Arabic varies from one country/area/neighborhood/family to another and are not written languages.
Modern Standard Arabic is written and read all over the Arab world and among Muslims in every country everywhere…but generally - it is not spoken. 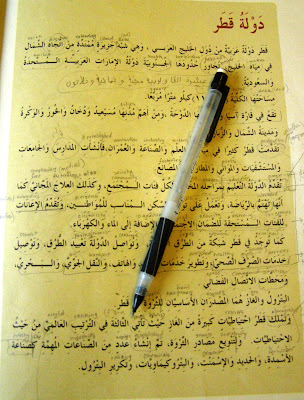 from my workbook: doula Qatar (Country of Qatar)
In Qatar, locals speak a form of the Gulf ("Khaleeji") dialect - which is very different from Egyptian Arabic.
Arab nationals from Syria, Lebanon, Yemen, Bahrain, Saudi Arabia, Emirates, Egypt...along with Muslims from every country in the world live and work in Doha.  All speaking their own form of Arabic.
While most do not speak a second dialect, nearly everyone understands MSA.
Many Arabs are surprised to hear MSA spoken by a Westerner.  Often…they laugh.  I am told that I have an "Egyptian accent" which somehow makes everything funnier.
But when the laughing is done…communication happens.
So why learn MSA?  Here are a few reasons:
And if you're ever in a Arab country where you don't know the dialect - you might still rent a horse…or camel. 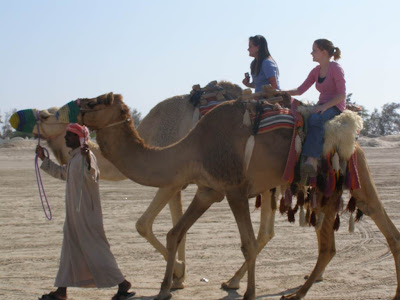 Katie and Kimber hanging out in the Qatari desert
Posted by Lucinda H. Kennaley at 8:19 AM 3 comments:

Qatari Teacher's eyebrows are drawn thick, smooth and black in the local style.  A bright smile transforms her face.
She's lived and traveled all over the world and connects easily to her class of multinational female students.  She effortlessly translates Modern Standard Arabic into Qatari dialect into English into French.  She is intelligent, knowledgeable, interesting, fun and funny.  She is energy.  Sparkle.  She is warm, bright, entertaining, smart and professional too.
As a child her favorite author was Roald Dahl.  She's named for her mother.  Earned a bachelor's degree in Computer Programming.  She admits she hates dates and dislikes tea and the best way to avoid eating undesired foods in a Middle Eastern setting is to claim allergy to it. 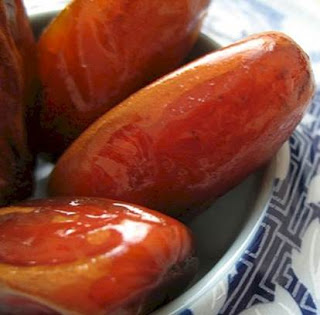 dates
She is an experienced speaker, a popular unofficial ambassador to the masses of expatriate women living in this tiny country.  What do Qataris eat?  How do Qataris live?  What's a Qatari wedding like?  She regularly speaks to women's groups about local family life, education, naming traditions, summer activities, food and hospitality.
It's easy to see beyond the abaya that cloaks her, skims the floor and shields her dark penny-loafers.  Or the sheyla she wraps and rewraps over her head, neck and chest in the way another might absentmindedly chew a fingernail or tuck hair behind ears. Her energy lights the room, fills corners, taps at windows.  She is engaging, interesting, enlightening, animated, dynamic, enthusiastic.
There is a knock at the classroom door.  A pair of dark eyes in an otherwise shielded face peek through the opening.  Black fabric moves and rapid Arabic escapes. 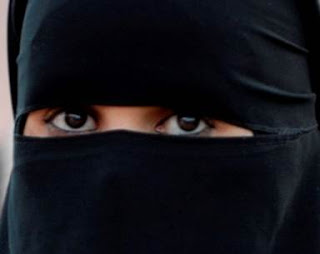 Qatari Teacher's brows crease.  "Laysh!" she exclaims.  Why!  It's not a question.
She rewraps her sheyla, adjusts her abaya.  Pulls fabric over her face.  Moves to the back of the classroom and sits down. 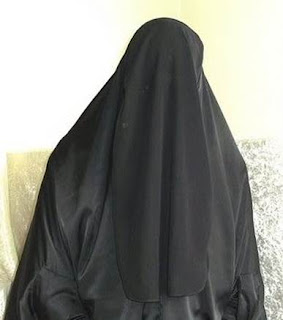 completely covered
In a finger snap, all light in the room disappears under a mountain of black.
No one speaks.  No one moves. Qatari Teacher is still and silent.
Three men enter.  They tinker on the computer, push buttons on a projector. Their eyes do not stray.  They focus only on the equipment, the task-at-hand.  When they're done, they gather their tools and leave.
Qatari Teacher flips her veil to the back of her head and returns to the front of the room.
Later, I ask her:  "Why did you…?"
She wraps and rewraps her sheyla.  Creases her brows.  Hesitates.  Says:  "I didn't want to draw attention to myself."
Haya is a kind of modesty that assures one's submission to commitments, responsibility, rules...especially when it comes to the tenets of Islamic faith:
"Haya may be translated as modesty, shyness, self-respect, bashfulness, shame, honour, humility, etc. The original meaning of Haya according to a believer's nature, refers to a bad and uneasy feeling accompanied by embarrassment, caused by one's fear of being exposed or censured for some unworthy or indecent conduct…They are shy of the opposite gender in this society because of what they might experience if strange men look at them…Abdullah ibn Umar (ra) narrated that the Prophet (saw) said: 'Indeed haya (modesty) and Iman (faith) are Companions. When one of them is lifted, the other leaves as well.'"
http://www.missionislam.com/knowledge/Haya.htm
Haya is the voice in one's head that compels her to do-the-right-thing.   Men are subject to Haya too.
An important aspect of Haya for Islamic women is to keep themselves hidden from all men lawful to them in marriage:
http://www.muhajabah.com/dresslikethat.htm

Some women (and men) are more conservative in the expression of Haya than others.
Posted by Lucinda H. Kennaley at 8:13 AM 4 comments: 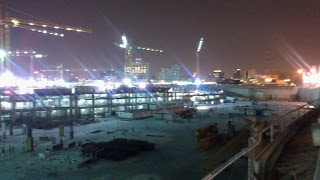 A slice of Mshiereb at Night - someone is working in the Big Hole 24/7
Here's what I know about Bob's employment in Doha:
The project is big.  In the billion dollar plus range. In a "wow, that's a Big Hole surrounded by chain link you got there" and a "cheez, them's a lot of cranes" kind of way.
The project is important.  A special viewing balcony overlooks the Big Hole to accommodate Sheikha Moza's visits to the job site.
The project is complicated.  Phase One A involves construction of four buildings, including a National Archive, Eid prayer ground and the Diwan Annex.  Phase One B consists of 27 diverse structures: hotels, apartments, offices, retail and mixed-used buildings, a mosque and more.  Phase One C consists of a school, townhomes and office buildings. The project employs thousands of people from all over the world.
There are more phases.  At this moment, Bob's company is not involved in them.
The color of a worker's hard hat identifies his/her function onsite:
white - manager/supervisor
red - safety guys
yellow - regular workers
blue - skilled workers
green - security personnel
(The function relative to the color of each hat may differ depending upon the project and the companies involved.)
Bob wears a white hat.
Each morning, six days/week, Bob rises at 5:30am.  He showers, dons business casual, swigs a cuppa Folgers Medium Classic and is out the door by 6:15am.  At the job site, he sits at a desk inside a trailer overlooking the Big Hole. 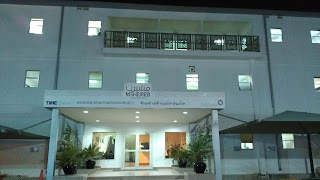 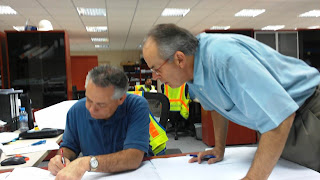 Bob and Randy confer
Sometimes Bob likes what he sees in the drawings.  At these moments there is great joy inside the Big Hole.
Sometimes Bob doesn't like what he sees in the drawings.  There is gnashing of teeth inside the Big Hole.
Sometimes the issue concerns areas prematurely constructed.  Wailing and beating of chests pours out of the Big Hole.  (Just before the sounds of ripping, tearing and rebuilding begins…)
I pick Bob up each day between 5-6pm.  Sometimes he's ready to go.  Sometimes he's meeting with a contractor and I get some extra study time in.  Sometimes he's not there and I get to wait longer.
Time is a variable thing in Doha. 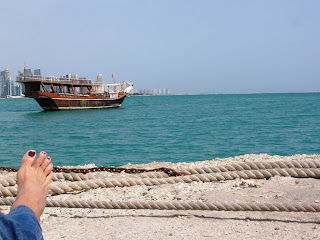 Waiting on Bob in Doha
ne day, with no fanfare, a group of yellow hats tore it down.  I never learned the official reason for the coop's presence except that "Sheikha Moza want(ed) it there." 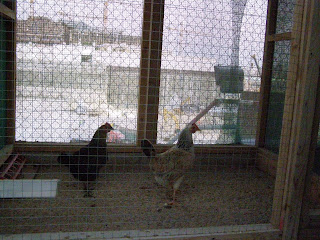 As this first part of the project whittles to a conclusion, Bob spends more time inside the Big Hole.  He climbs to the roof tops of buildings, looks over protected ledges and safely navigates sky-high scaffolding.  He wears steel-toed boots, hard hat, safety harness, safety glasses, jeans, tee shirt and a bright yellow vest for job site visits. 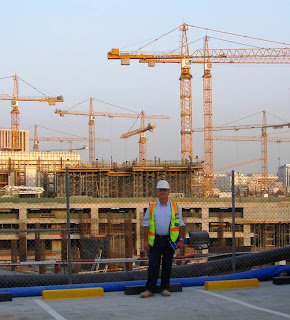 My Life in America - the Experience

In America…
I don't carry toilet paper in my purse. 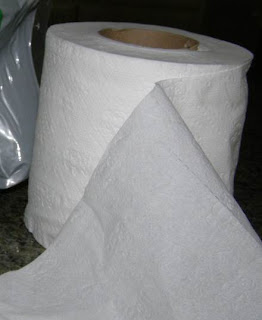 In Doha: I never leave home without it.
Most public facilities do not feature that little spray thing - and paper always goes in the bowl, not the trash can. 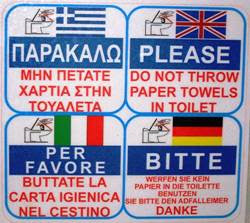 sticker seen on hotel bathroom wall in Greece
are Americans the only country to flush the paper?
I don't think too much about covering bare skin - unless I'm cold or naked.  I wear shorts, sweats, skirts, pants, cropped-, long- and no-sleeves, tank tops, jackets, tee shirts.  I dress according to the occasion and what's-in-my-closet. 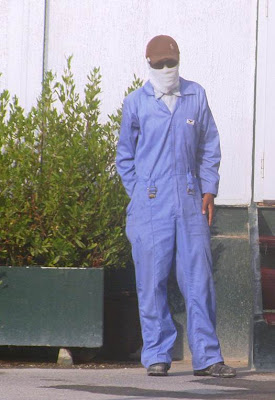 Modesty is just one reason people cover up in Doha; weather is another.
I do "look" at people - to discover, appreciate,  wonder.   And I judge: facial expressions, gestures, tics…do I know her? Is he friendly? Are they a threat? Where'd she get that belt? 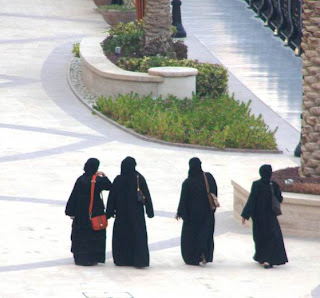 Not "looking" in Doha
I talk to strangers of all ages and genders in America.  I ask for directions, offer a compliment, request help…of people I don't know at all.  I have nodding acquaintances too:  men and women whose faces I recognize because they shop at the same time of day I do; gardeners, joggers and dog-walkers outside at the same time as me.
In my American neighborhood, Kyuong and I chat as we water and weed.  My yard merges with Sheri's.  A ten year old boy climbs the back fence to retrieve a lost ball.  A teenager waves at me as she giggles into a cell phone sitting cross-legged in her garden. 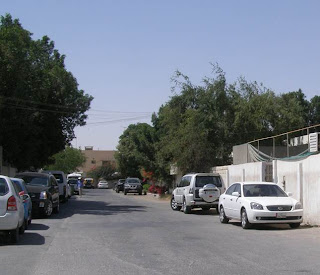 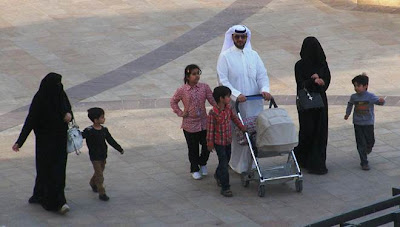 One doesn't often see kids publicly at play in Doha.
Teenage girls babysit for money in America.  A nanny sometimes lives-in, but often she's a regular babysitter/mother's helper who goes home at the end of her shift.  Unless she's a he and then he's a "manny."
It seems everyone has a Nanny in Doha
Expats are allowed one Nanny per family
Locals often keep one Nanny per child.
Nannies sit with the kids
when the family eats out.
Nannies push strollers and hold small hands
staying a few steps behind Mom and Dad
during Friday Family outings.
In America, I pump my own gas.  I also cook, clean and take out the trash.  I scrub the toilet and bathtub, iron shirts, fill the dishwasher - and empty it too.  Sure, there are full time, live-in maids in America, but no one I know employs one.
The Doha maid accompanies her local woman
Everywhere.
She walks a few steps behind her mistress
Often wearing a pajama-like uniform.
She carries bags at the mall
and holds cell phones.
Kind of like a lady-in-waiting
who cooks and cleans and watches the kids too.
In America, I wait my turn.  Sometimes I'm after people who aren't even American.  Sometimes I'm last!  Jobs are won based on knowledge, skill and experience, not nationality or gender.  And hospital emergency rooms service patients according to need. 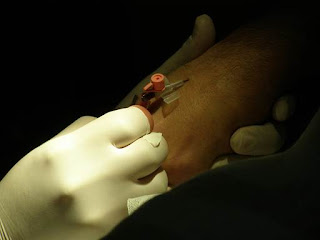 Doha hospitals feature a separate Emergency Room just for locals.
Also in America…unemployment is high.  Money is tight.  Gas is expensive.  There is death, divorce, cancer, Republicans, Democrats, Obamacare and the Twilight series. 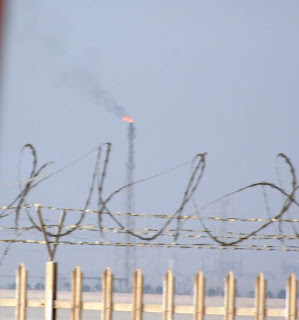 Qatar is the richest country in the world
per capita.
She generously provides employment plus housing, transportation and more
to thousands of people
from everywhere
thanks to an abundance of oil and gas.
It's not perfect.  But for me…America is home. 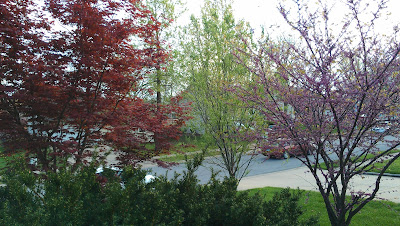 trees in my front garden: purty
Posted by Lucinda H. Kennaley at 8:17 AM 4 comments: