Driving in Doha - the temporary license... 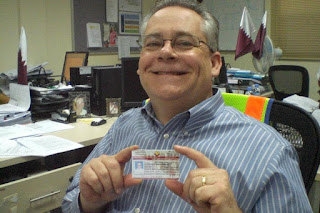 Bob achieves his (temporary) Qatari driving license!
Once upon a time all an American needed to earn a Qatari driver's license (required to drive legally after expiration of the initial 30-day visa) was an International DL (costs about $15 at any US AAA office) and the ability to pay a fee.  Then, in the way things happen here - one day someone decides the rules need a facelift...and bing-bang-boom, without warning...everything changes.
Bob's coworkers obtain their licenses the pay-a-fee way.  No one expects Bob's experience to be any different.
First up: an eye test.  Bob passes.  He's off to a good start when the examiner notes that Bob appears in his photo without glasses.  There is confusion over the meaning of the "F"on Bob's US license (it means "full privileges") and - Bob is sent away: "Come back later."  (Bukura, bukura...)
Bob arrives at 5:45am the second time he makes his way to the little driving school.  He is the 401st man in line (men and women test on separate days).  He waits 45 minutes and is given a surprise "signal" test for which he is unprepared (it's not "no passing", it's "no overtaking" - that's not a "no parking" sign; it's "no parking OR STANDING").  Again, Bob is sent away.  "Come back in three weeks."
At his third attempt, Bob's reviewed hard-to-come-by study materials.  He carries copies of his passport, sponsor permission letter, US and International driver's licenses.  He arrives at 5:00am, is among the first in line...and passes the signal test in four beats.  He climbs on a bus full of men from all kinds of other places - and follows a little car around Doha for a couple of hours...until finally it's his turn in the driver's seat.
Manual transmission.  He shifts, drives 200 smooth-as-butter feet. The examiner waves his hands.  Pass!
Mabrook!  Al humdu'il allah!  Wunderbar!
No more riding as a passenger in someone else's vehicle.  No more gritting his teeth and hanging onto the door as Wife spills in/spits out of the roundabouts (hey, that's how it's done!).  No more waiting on a taxi or walking to lunch.
Bob is back in town.  Watch out, Doha!
Posted by Lucinda H. Kennaley at 11:30 PM