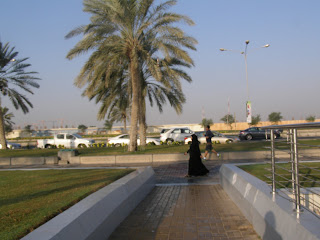 joggers and walkers along Doha's Corniche

Arabic men in long pants and shirts, European(ish) men in shorts, a few women like us in leggings, sweats and modest shirts with hair uncovered...and lots and lots and lots of covered women.  Most wore black abayas and hijab (sheyla) with faces visible, while others wore niqab, with either a leather-like mask or a scarf that shielded everything but the eyes.  At least one woman was completely hidden, black scarf over her face, black gloves over hands, classic black abaya - and red Nikes.  She held an ipod in her gloved hand, cord snaking under her scarf.
A few of these women in black were in groups of twos, but most were, like us, out for their morning constitutional, focused on the task at hand and seemingly content to go it alone.  (As far as we noticed) no one stared at us.  There were no "ya habibis," tongue clicks or finger pointing.
No conversation or hello nods either, though:  we did our thing and they did theirs.
We worked our way past the Amiri Diwan (presidential palace - offices), the Heart of Doha project (1A) towering in the background: 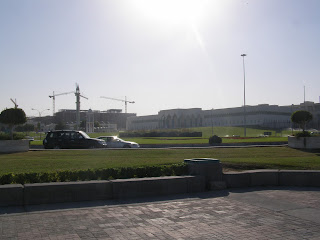 Heart of Doha Project from the Corniche

to Ramallah Park with its huge, climbable reminders to Believe, Achieve, Realize: 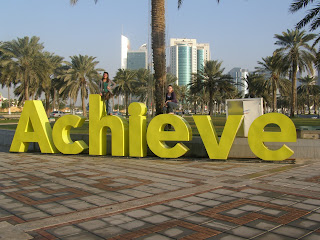 Katie and Kimber achieve
Past the curious goat statue that advertised (past) Arab Games and (also curious) mouse shaped structure that encouraged excitement about the (also past) Asian Games. 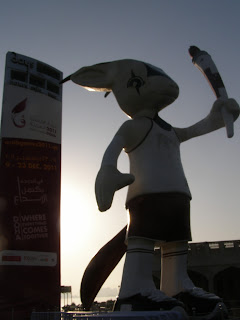 Through the forever and everywhere (and our reason for being here) construction and on toward the West Bay - where we met Katie on her jog back.
(Truth:  Katie jogged. Kimber walked beside me as I focused on working both ankles equally - ie, not limping - in a more or less rapid motion...as we trekked the semicircle brick pathway that outlines the Gulf inlet between Doha's beautiful West Bay and downtown.  It was a double awwal - first jog since I fell off the front porch September 2011, bone contusion, months off my feet, missed half marathon, no work, much frustration...and - first "jog" in Doha.)
We've driven everywhere (this is truly not a walking city), learned some Khaleeji (dialect) Arabic, hit the malls, shopped the souq in the quiet daytime hours and much busier evening (Katie may have gotten engaged last night), bargained, lounged at the beach (a lot), dune jumped (Bob really got into it), collected shells at the Inland Sea, enjoyed pita bread with a variety of interesting dips, eaten at Arab, Moroccan, Lebanese, Italian - and, yes, American - restaurants. 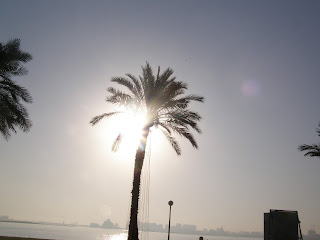 Our visit has gone by so fast.  Hard to believe it's almost time to go home!

Great travelogue--interesting, even if you and yours weren't MINE--. I love it that you all are having this fantastic experience. Mom/Peggy/GrandMaMa

Very good Cindi. With your various posts, you've given an excellent description of what it "feels" like in Doha, which is far more important than simply how it looks. You will always be glad and remember these times with Katie and Kim. And isn't it good to be home! Cousin Butch