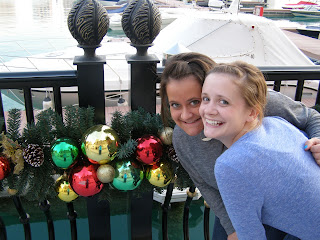 A washing machine that washes and dries in the same drum.  (As goofy and non-productive as it sounds.)  Light switches on the OUTSIDE of doors.  Kitchen and hallway windows that look over the elevator lobby and doors that open to a wall of sheetrock.  A pulsating shower, electrical sockets that need to be turned on before use and exploding water faucets - soak ceilings if spigots are turned on too high too fast.
Cars catch on fire so often here that portable hydrants sit on street corners, hoses wrapped around drums on wheels.  Since there's no street sewer system, water puddles where it lands until it's sucked into another drum and carried away.
Much of the city is under construction - housing developments, high rises, malls, streets and highways, parking lots and more.  Doha is a maze of barriers, don't-go-this-ways and "diversion" (detour) signs.  Buildings are constructed every which fancy, strange, archictecturally intriguing way...the new grocery is in the zig-zag building, a high rise is shaped like a bullet; here's a round office building and there another curves like a C.
Strangely, many of these interesting structures and concrete/stucco-style homes stand empty.
Natural born Qataris don't celebrate Christmas - even so, the commercial trappings of the holiday outline the walkways and mall windows (Christmas trees, holly and ivy, tinsel and shiny holiday balls).  Classical music plays 24/7 outside our window - from speakers placed at the base of imported palm trees lining the bay's walkway.  Birds chirp from another set of speakers inserted into the tree's branches.  :)  No (real) birds or bugs here, so no screens on doors or windows - ours stand open to let in sound, smell, light.
Ice is at a premium - we still don't know where to get it (for coolers and swollen ankles).
There are rules about who can be at the mall and when (men - unless they're American - must be accompanied by families on certain days).
And most people don't speak Arabic.  Qataris are outnumbered 3 to 1 by a mix of hawagas - Americans, sure, but we're a minority to workers from the Philippines, India, Sri Lanka, and other places.  The checker at the grocery is an Indian working for a Philipino, making change in Qatari Riyals for product advertised in English.
Oil and gas revenues are shared by natural born citizens, so they don't need to work for money...and (for the most part), don't.  One expat said POINT SIX Qataris work in the private sector.  (The exception - all of the highest level positions are held by locals.)
How do we know who's a local and who isn't?  Well, locals speak Arabic - to each other.  They dress in Middle Eastern clothing (sheyla, abaya, dishdasha, gutra).  Their license plates have fewer than six digits.
After a fun filled couple of days motoring around the city, climbing sand dunes, learning the area...today we rest.  We'll do laundry (a never-ending task), visit the beach and lounge in (one of) Bob's jacuzzis.  We'll wander the Carrefour (the local Walmart) so there's food to nibble and cook.  We'll figure out the tv, read, eat and clean, do email, blog.
We'll (continue to) miss Chris and his beautiful babies.  We'll remember Popo and skype our extended families (once they wake up). We'll (ie, I'll) study our (my) Arabic (even though I'm talking to myself).
And we'll look forward to the days ahead - full of all kinds of interesting, new and different things...
Posted by Lucinda H. Kennaley at 2:08 AM

Sounds like a fun adventure...except for the no arabic thing. Its fun to try and figure out the language. --AK