A Made Up Place 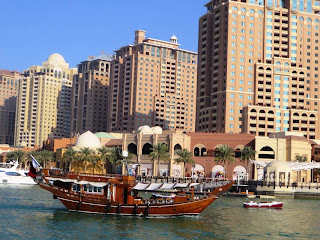 under-tenanted at The Pearl, 2014
"…the number of residents here will grow on average by 7.4 percent annually in the coming years, reaching 2.5 million by 2016…"
Dohanews.co
If you're among the thousands of new expats expected to relocate to Qatar in the years leading up to the 2022 World Cup, here are a few things you should know:
1. It's KAH-tur.
قطر
Not Cutter (US), KAH-TAH (Brit) kuh-TAR (everyone else).
There are three letters/sounds in the classical pronunciation of the country's name : qaaf (enunciated deep in the throat)/tah (with a concave tongue)/ray (rolling r).
Exception: in Qatari (KAH-ta-ree) dialect qaaf is pronounced with a soft gee, as in gas, so locals refer to their own country as GUH-tur. 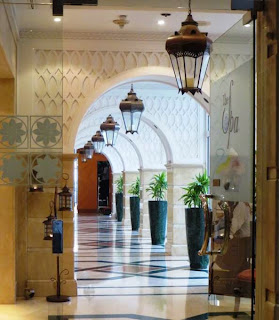 this way to "the spa"
2. They are not Qatari.
There are somewhere around a whole lot of people living in Qatar - but only 1/3 of them are bonafide, card carrying Qatari nationals. Of the remaining 2/3, most are unskilled laborers from India and Nepal or service workers from Philippines. A small percentage of the larger population are from the US, Britain, Australia and other European nations. Even shopkeepers dressed in traditional thobe and ghutra at the brand-new-made-to-look-old Souk Waqif are from somewhere else.
Sure, Qataris are out and about. You'll see them in malls, feel your car shake as their Land Cruisers rush past, smell their oud in elevators. And, yes, Qataris work! Not every day or regular hours. They take a lot of vacations. You'll never meet a Qatari taking orders at McD's, working the DQ drive thru or answering phones at the Ramada. But still. Fresh out of school they claim top tier positions as government school teachers, administrators, CEOS and entrepreneurs (see #3, below). Qatari law requires that a local own a minimum 51% share of every business.
In Qatar, there are lots of layers between the larger population and nationals, even in independent business. Unless you come to Qatar as a nanny, maid, driver or clerk, hang around Fanar Islamic Cultural Institute, get into trouble or enjoy a busy night life (see #4 below) - you may never come to know a Qatari in Qatar.
3. Wasta. Bias. Traffic.
Wasta is nepotism without stigma; specially packaged bias in a place where employment, accommodation, financial perks and social rank are already determined by nationality and race. Where a high school graduate may be absorbed into university with low expectation and flung into a high level position without experience. It's a culturally approved professional track for the young and privileged when rules already preclude attendance at government funded university beyond age 40 and foreigners may be expelled once they reach age 60.
Hooray for traffic, the great equalizer. No amount of wasta exempts you, it doesn't matter where you're from, the color of your skin, language you speak or how old you are. Cars, trucks, vans, buses, Land Cruiser, Toyota loll bumper to fender; nationals and expats together in endless smoky lines, late for work and play; listening to Taylor Swift on CD, blaming them (see #2, above) for their troubles. 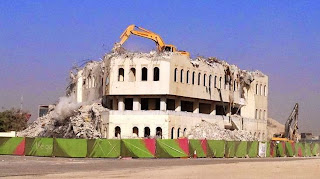 wasta in action?
photo courtesy Matt Mikus
visit Matt's travel blog: postcards and playlists
4. Not as conservative as you think.
If she's local, between the ages of 25 - 50 and dressed in abaya and hijab, she likely has a college degree. She's fluent in three languages, well read and considering a new business venture. Odds are, she's travelled the world, holds a driver's license, manages a busy household in a rapidly changing environment and works too. She's thoughtful and interesting and you'll never meet her. At least not in Qatar. (See #2, above.)
The face of Qatar is English speaking/educated abroad/thobe-wearing/wasta employed/under-30 year old, young men.
In Time Magazine, they stand stoically for photos before West Bay's whacky skyline. They're a vision in white at the Qatar Tennis Open (and other celebrity events).
In Qatar? They're hanging out of SUVs as they circle the camel race track. Flashing Lamborghini headlights in your rearview mirror. Swerving in and out of the everywhere traffic clog. Performing motorcycle tricks in intersections as multitudes of incidental spectators idle. Escorting falcons through the souk. Creating an impassible thobe-to-thobe chain along the Pearl's boardwalk. Sliding down dunes in $60,000 USD cars.
Nose tapping, laughing, hand holding. In restaurants, hotels, movie theaters and, yes, wearing Western clothes, in bars. (Traditional attire - and local ladies - not allowed.) 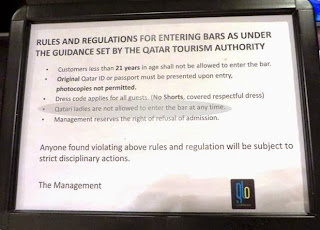 (highlight added)
White thobe and sandals, ghutra. Male traditional attire is legitimately worn by conservative Muslims of all nationalities as a humble religious gesture. It's worn by shopkeepers and other workers to provide ambience in the souk and at special events. But if it's after 3pm, he's under 30, heavily starched ghutra is tipped at a jaunty angle and other expats are stepping aside and/or changing lanes? He's probably local. 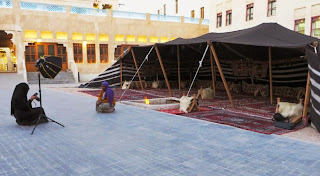 have-your-pic-taken-before-a-Bedouin-tent
Souk Waqif, 2014
5. A made up place.
Less than one hundred years ago, Qataris were pearl divers in the summer, Bedouin camel and sheep farmers in the winter. Locals lived in fabric tents and porous rock huts. All of which have long since dissolved into the landscape.
There are no pyramids, castles, ancient mosques in Qatar. Zubarah Fort wasn't built until 1938. There's no indoor snow skiing, walk-through aquarium or Burj Khalifa.
What Qatar does have is a rocky coastline, dunes, Sheikh Faisal. There is evidence of ancestral participation in the Orient's purple dye industry. Living people who remember (if you're fortunate enough to meet one; see #2 above).
And, oh yeah, money. 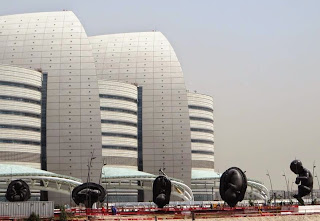 Thanks to oil and gas income, today's Qatar-in-the-making is a new money let's-build-something! playground produced by underpaid Asian laborers held captive by the Kefala sponsorship system. In which a worker relinquishes his dignity along with his passport.

As the country hasn't been industrialized long enough to provide its own architects, engineers and skilled workers, for its reinvention it must rely upon the talents of  foreign professionals. These educated, experienced, often pushing-60 individuals are paid to design and implement infrastructure, roads, stadium projects, a multi-billion dollar downtown, zoo and possibly the world's-longest-strip-mall - a shopping shell pocked with inaccessible-due-to-construction businesses.

Thanks to money, sand is processed, water desalinated. Humid, shimmering air is recycled so interior temperatures remain arctic even in the most eyebrow sizzling weather. Under-tenanted resorts exist in places that once belonged to the sea. Elaborately decorated mansion sized villas bloom in artificially enhanced areas that once couldn't sustain life. Homes feature his'n her majlis spaces where she sips tea and nibbles sweets with the ladies while he smokes sheesha and hangs with the guys.

Thanks to money, there are highways garnished with floral displays, modern automated billboards, plazas, parks, old malls, new malls, malls-to-be. But no tourists.
"…We don't want people to come for a $50 room to lie on the beach all day and walk around with a backpack and shorts. These are not the type of people we're targeting. We are different from the neighbouring countries. They focus on tourism as a source of income. If (the tourism market) crashes, it makes no difference for us…"
Qatar Tourism Authority's Ahmed Abdullah Al-Nuaimi,
Reuters, August 2011
In 2014 Doha, oil and gas funded high rises and hotels stand empty. Bored clerks check facebook and play games on phones. Laborers are paid to attend world class sporting events. Doha's version of the Big Red Bus, the cheerful green and yellow, double decker DohaBus, trundles empty from Lagoona Mall to the (under construction) National Library. At night, West Bay's skyline strobes above sporadically populated party lit dhows. 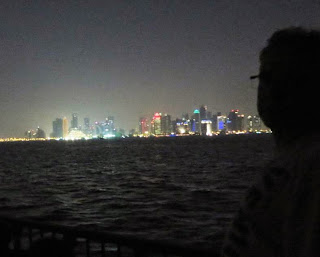 Thank goodness for money! Without it, today's Qatar just wouldn't…be.
Posted by Lucinda H. Kennaley at 1:55 AM

Anyone thinking @ making a trip to Qatar should read this blog. Really, really interesting and helpful in understanding how things work in that part of the world. And is some other places, too.

Hold on to this one. It should be read by anyone contemplating a trip to Qatar. Perhaps you can publish it again when your blog goes public.
Dad