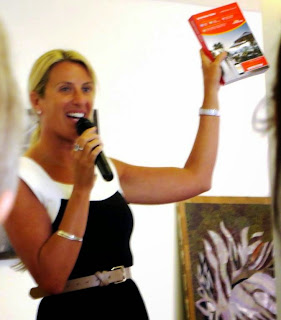 
Donna Benton is owner and CEO of The Entertainer, a popular two-for-one coupon book available in an ever expanding list of countries throughout Africa, Asia, the Middle East and Europe. She landed in Dubai from Australia 14 years ago for a job that didn't work out. With $3,000 in her pocket and not much else, she built a profitable business as a woman in a male dominated culture. Today her start up is a multi-billion dollar enterprise with themed books in UAE, Qatar and many other places including Johannesburg, Malaysia, Hong Kong, Jordan, Lebanon and London. The product is newly available as an app that downloads coupons and updates to a subscriber's smart phone.
"…the company currently has more than 100 employees worldwide, with around 70 based in Dubai. 'We have a new employee every fortnight and are expecting more new hires'…"
GulfBusiness.com, 2013

But Donna Benton is not the reason a room full of international women still hums long past the featured speech. She is not why women continue to sip coffee in a well-appointed social room at Souq Waqif's Al Mirqab Hotel an hour after the end of the meeting. Nope.
The buzz is all about Khalifa Saleh Al Haroon. Or, as he's better known in these parts, "Your Friendly Neighborhood Qatari, Mr Q."
He's late. 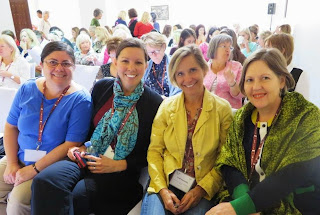 waiting on Mr Q
Mary Anne, Sam, Cindi, Wendy
AWAQ meeting
Doha, Qatar, January 2015
In Qatar, Mr Q is a celebrity. His one to three minute, fun and funny videos introduce the inquisitive foreigner to curious Qatari habits: Why do Qatari men rub noses? What's the proper way to sit down? Shake hands or don't shake hands? Do Qatari men wear pants under their thobes?
"I wanted to be the first Qatari movie star in Hollywood," says Khalifa. "But my dad laughed." He shrugs. "I went into law."
Watch Mr Q

QTip: Why are Qataris Smelly? (5 ways to smell good!)

Today Khalifa aka Mr Q is dapper in a brown winter thobe and a white ghutra worn in the "cobra" style. He is enthusiastic, friendly, outspoken. And tardy.
But, "I'm not a late Qatari," he insists. This is an isolated instance, not a cultural event. He points to the usual delay-making factors: Traffic. Road closures. No parking around the venue.
Spoons clink porcelain, the scent of sweet bread warms the air. Heads nod, corners of mouths turn up politely. Donna Benton was on time. We were on time.
Still.Whatev. "Late" is the name of the game in Qatar. He is Qatari. He is forgiven. 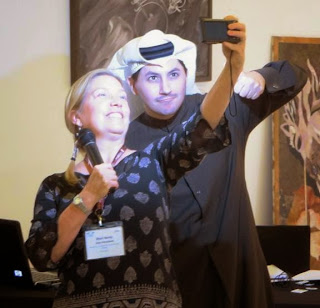 Selfie with Mr Q
AWAQ meeting
Doha, Qatar, January 2015
Besides, he's adorable. Charming, outgoing, charismatic. He holds law degrees from the UK, speaks colloquial American English with a shiny bit of I-attended-British-university. He likes dogs. And bonus: he's 30 years old and single.
Khalifa's Linkedin resume outlines an impressive list of achievements dating back to his high school graduation: board member, shareholder, founder, CEO, ambassador, business owner, head of this, chair of that. Young Achiever of the Year, Qatar's Top 100 Hot List for 2014. He's the founder of ILove Qatar.net, (http://www.iloveqatar.net/) which just celebrated its 5th anniversary. His numerous skills include "…start-ups, business strategy, entrepreneurship, business development…" and more.
He flips his ghutra over a shoulder.
"The BBC claims that Qatar is schizophrenic," he says. "That we don't know if we want to be cultural or modern."
He straightens his shoulders. "I want Qatar to be the most admired country in the world." Futuristic, progressive, modern, tolerant. As he says in inspirational speeches to school aged Qatari boys, "You can have it all." 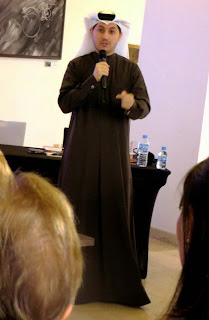 Khalifa Saleh Al Haroon, aka Mr Q
One woman raises her hand. "What about the generation of Lost Souls?" she says. You know, the boys who rev engines at The Pearl late at night, race motorcycles in creeping, bumper to fender Doha traffic? Chase tourist filled dhows on jet skis? Cruise bars? Wreak havoc from one end of the country to the other? Those wasta employed, over privileged Middle Eastern goodfellas? Qatari boys chasing tourist dhow on jet skis
(Yes, this really happened)
Outside Doha, September 2014)
Khalifa shakes his head. Have you heard of the Doha Depression? he says. This is about boys with more time than things to do. And a culture that indirectly teaches its young that it's not okay to fail.
"I believe there's a generation between mine and my father's that became too rich too quick," he says. In a survey the most common goal of this group was to "achieve their own skyscraper." Today things are turning around as a new, up and coming group seeks bigger dreams. "Guess who's the current largest audience on youtube," he says. "Saudi Arabian females. Most popular topic? Education."
Another hand goes up. Why do Qataris keep separate from expats?
"For every expat to have one Qatari friend," he says. "Every Qatari must have seven expat friends." He laughs. "I already have more than 100 family members!"
A third hand. "Can we get a dog park in Qatar?" And finally, "Who do I talk to about setting you up with my daughter?"
Um. "Just ask," he says. "I won't say no."
With grace, sincerity and for coming up with a politely generic response to the dog park question, Khalifa aka Mr Q is a stereotype-busting ambassador to a place that has blossomed high rises from sand in the way a 12 year old boy sprouts six inches overnight.
But Donna Benton? Who started with nothing, generated a marketable idea in a place where it can be difficult for women to be accepted on the same platform as men? And, without maids, nannies or someone to carry her cell phone, turned her idea into a multi-billion dollar venture? She's amazing.
"…The Entertainer now has 12 types of discount voucher books that include many two-for-one deals on waterparks, fine-dining restaurants, hotels, golf courses and adventures in the desert. The company's deals now go further afield than the Middle East, and cover the Maldives in the Indian Ocean to Cyprus in the Mediterranean. Two new books are also slated to be launched next year in Riyadh and Jeddah…"
TheNational.ae, August 2011 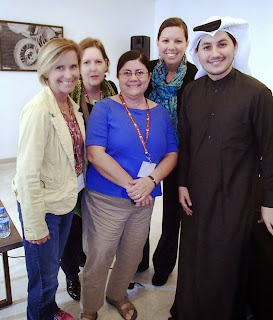 Did Moms get in line to "just ask" @ setting up Mr. Q with their daughters? Would the daughters be veiled when they met?

Informative! I gather that the Entertainer is based in Qatar? Why did she pick that country to be based it?
Dad

The Entertainer (and Donna Benton) is based in Dubai. Qatar is one of many countries where the coupon book is offered. It's REALLY popular in Qatar.

I don't know Mr Q personally, of course, so I don't know how traditional he is, but I imagine his response was intended as a polite return to a question more meant to compliment him on his charisma than invite him to be a son in law. The "correct" answer would have been to contact his female relatives. What I know about Q marriage customs is here: http://bobandcindi.blogspot.com/2014/01/my-first-qatari-wedding.html. Thanks for asking!