Treasure in the Sand (Not Oil) 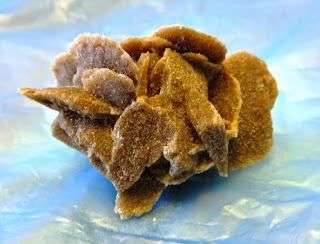 desert rose
Qatar is known as the wealthiest country in the world, per capita. Here you'll find world class sporting events, resorts (under construction), stadiums (in the works), spas and restaurants (coming soon). Qatar is also surreal traffic, tower cranes, nepotism (wasta), prejudice, bias and pollution. Countrymen huddle behind 10 foot walls, no one, it seems, speaks the local language and there's no such thing as a Qatari restaurant. 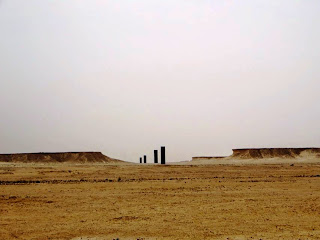 seen in the desert
There are, however, remaining pockets of untouched earth. Where no one has marred the landscape with weird steel plates and called it "art," filled the sea with concrete or crumbled porous stone with trucks. 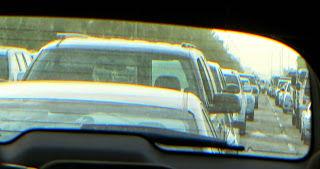 behind the wheel in Doha
To find this disappearing space you must venture far from the city's desalinated river of life. Past the tower cranes and thirsty trees, water and sand processing plants. Beyond Lagoona's zig zag buildings and West Bay's whacky high rises. Far from roads lined bumper to bumper with SUVs, rumbling concrete mixers, rebar loaded semis and the neon night where stars twinkle from party dhows that drift under strobing towers.
Here you'll find the under populated, plaster coated old neighborhoods of early Qatar. 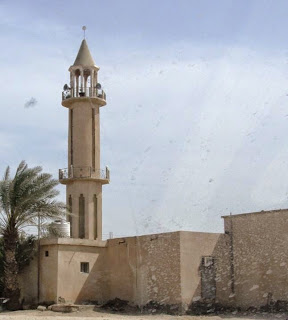 (pic taken thru a dirty window)
Slide between the houses, majlis tents and mosques and aim for the desert. Continue to where the soft sand is a crisscrossed network of animal, foot and tire tracks. Where hills of porous rock slip into plains of earth and sky. 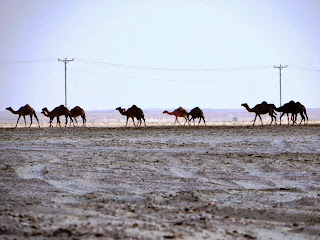 seen in the desert
When the only sign of civilization is the persistent trail of power lines and race camel farmers, search the sand for splotches of white sabkha salt flats and scattered amber disks. 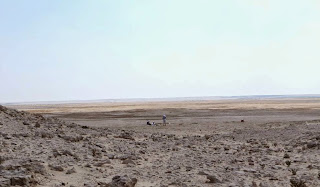 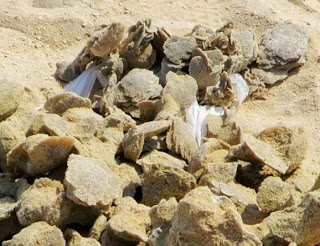 "Desert Roses are found in areas of sabkha either lying on the surface or between the layers of wet and dry sand. These roses…are intricate, petal-like clusters of crystals, mostly composed of gypsum…"
Qatar Kaleidoscope, by Frances Gillespie
Desert Roses are not exclusive to Qatar; they're found in other hot, dry, sandy places, too, like Mexico, Morocco, Spain, Tunisia and Arizona. They are mineral formations, composed of gypsum (selenite) and barite, shaped when fine sand is trapped between mineral fibers and then crystallizes. Barite is the heavier mineral, while gypsum is more fragile and fibrous. A rose occurs when multiple discs adjoin at angles. 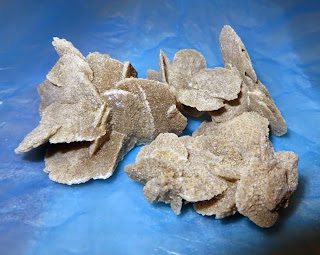 Gypsum roses are more commonly found in the Middle East, Southwest USA and Arizona. Barite roses are found in Oklahoma, England, Italy (and many other places). Because the mineral is softer, gypsum roses are more fragile appearing than barite roses.
Some believe the sharp but delicate objects have supernatural qualities that can neutralize bad energy, purify, heal.
"…Some of the inhabitants of the Sahara desert believe that what they call the 'Sand Rose' has an internal energy that is used for protection, prosperity and purification…"
Mind Body Spirit online
In Qatar, the best formations are found in the desert's salt flats, deep in the heavy sand, where the earth is moist and cool. Dig carefully with gloved fingers and brushes to avoid nicking the sharp, but delicate leaves. The right locations yield an abundant supply of crystals. 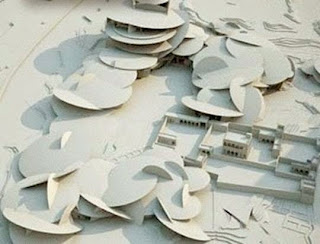 Qatar National Museum (under construction)
"The (Qatar National Museum's)…striking design was inspired by the desert rose, an other-worldly mineral formation of crystallized sand found just beneath the desert's surface. The pavilion's sand-colored floors, walls and roofs resemble the sharp bladelike petals of the desert rose…"
wrmea.org
In Qatar nothing is as it was. There are no more pearl divers. Salty sea water is desalinated, sand is processed, even the sun is filtered to assure arctic interiors as outside temperatures soar to somewhere between hell and death. 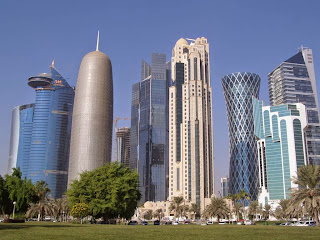 West Bay
Skyscrapers lord over a once vast expanse of camel spotted sand. Grocery stores feature potatoes from Australia, carrots from Philippines, apples from France and cheese from Lebanon. Qataris are a minority here - in fact, many expats have never met a local. Laborers, administrators, engineers, geologists, architects and the cable guy are flown in to mold and shape the environment to accommodate the Qatari vision.
It seems that nothing and no one is from Qatar. 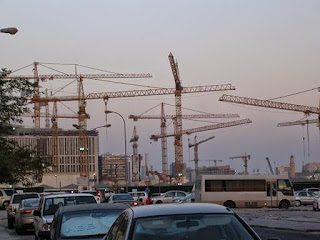 Except (oil and) one rare and beautiful thing: the Qatari earth still shapes its own desert roses. 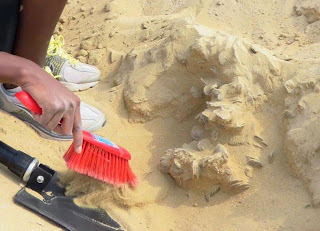 Ronita's desert treasure
Posted by Lucinda H. Kennaley at 10:15 AM