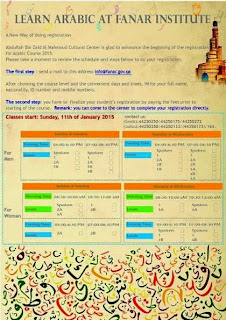 "As we aim to improve educational environment in our institute, We would like to inquire of your absence from sessions?
Your clear answer support us to develop our services."
اسماء عبدالله صالح قاسم اليافعي'

Dear اسماء عبدالله صالح قاسم اليافعي'
Thank you for your email. This is why I stopped attending programs at Fanar:

Sad for you. Confusing as to Fanar, and the reason(s) that they may have for abandoning two students who would work so hard to learn the language, and understand the culture, of their country.