Peckish in Dingle or What We Learned on Holiday in Ireland 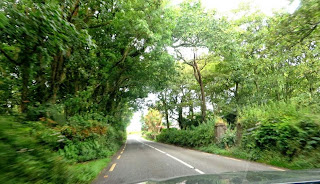 narrow country road, Ireland
Villages pinwheel about no-shoulder country roads boxed in by thick hedgerows, their sharp branches lopped inches from your car's passenger door. Your driver sits on the right at the center of the street where traffic headed the opposite direction is a sneeze away. Blue sky peeks through a bower of tall, green trees, a barrier between you and the scenic patchwork of rolling, green velvet hills.
Everything in Ireland, it seems, is green. Except the horses, cows, llamas, pigs - and sheep, which are splashed with red or blue paint to signify ownership. 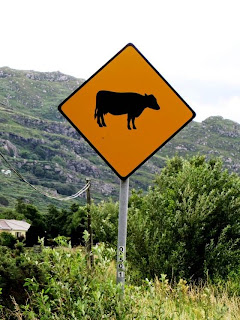 watch for cows
You pop out of the green cave to a line of colorful, flat front townhomes. Each stretch of panes and doors is detailed a different vibrant hue and bright flowers tumble from mossy window boxes. Across the street, a pub proclaims itself Murphy's, O'Donnell's or Grogan's on a mirrored black sign. 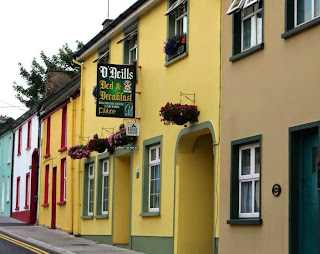 Dingle
You hear rhythmic thrumming and glimpse what appears to be a large white dog rushing toward you. It has black pin prick eyes and stubby legs. It's big and barrel chested, hair tightly curled, a splash of blue on its neck.
It's a sheep.
Beyond, two men in jeans and collared shirts stand shoulder to shoulder, hands on hips before a green shrouded home. They watch the sheep, their faces a confusion of patience and irritation - like parents correcting a toddler for the same naughty behavior for the thousandth time. Under the men's feet, an asphalt driveway meets a wooden fence behind which wait a quiet flock of blue brushed sheep. 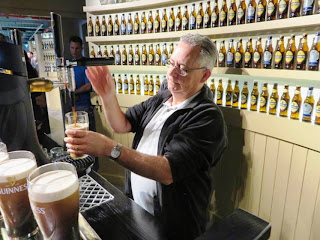 Bob at the Guinness Academy
where we learned the proper way to pour a pint
If you live where rules are complex, locals inaccessible and no one speaks the native language - or, wait, if you live anywhere - Ireland makes for a restful holiday. It's a girdle loosening, shake out the curls, relax the abs place. It's bacon, beer, music, holding hands in public. It's that happy-all-over feeling you get after a good run mixed with the cozy acceptance that happens when your kids are home, everyone's laughing and talking at the same time while downing handfuls of M&Ms from a shared bowl. 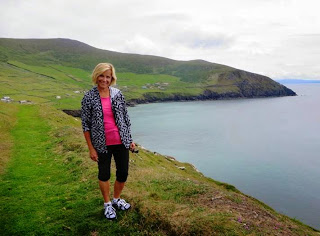 breadin' da lurvley ahhr
Contrary to what your red headed castle tour guide says about ruby tresses going extinct in Ireland, it seems every third person has red hair. And the Irish speak English. Sort of. They say things like "lurvley day," "the coffee is brilliant," "do you fancy some ice cream?" and "I'm feeling peckish." They pronounce "th" as "t" or "d" so you're not sure if "turdee'" is thirty or thirteen - and they laugh when you get it wrong. 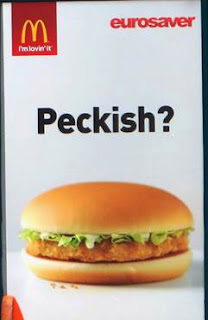 ahhr ye peckish? eat.
You'd be good natured too if you lived this close to the Guinness Factory and Ballyduff, Dingle and bog were everyday words meant for regular conversation.
If you were to stay in Dublin's Temple Bar District in a street facing room, you'd fall asleep to lively folk music and wake up to accented singing under your window at 3:30am. At 4:00am you'd hear a cheery "g'morning 't is" as Dubliners arrive to work.
You'd hear stories. Like how Arthur Guinness signed a 9,000 year lease (45 pounds a month, still in effect) and his wife Olivia gave birth to 21 children.
And Joseph Plunkett married Grace 10 minutes before he was executed at Kilmainham Gaol. And how Grace, who never remarried, was later incarcerated in the jail herself. 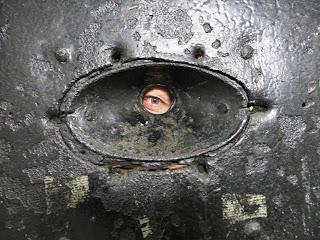 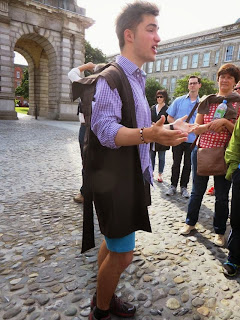 the short hangy things on the back
are longer for older students
At Trinity College, a Robert Pattinson lookalike in a Harry Potter vest tells a story about students who killed a professor then went on to high level political jobs. He explains that points, not extracurriculars or personality get you into the exclusive institution. And that good students (and those from the North) attend for free, eat in special areas and may graze their sheep in St. James Park.
As long as runaway ewes stay off the sidewalk. 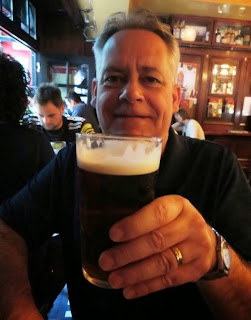 Wow what a contrast from one of the most arid of places to one of the greenest on God's green earth--Ireland!
Interesting. Are the Irish wanting their independence like the Scotts?

Wonderful description!!! Ireland was sooo wonderful. Trying to figure out when we can go back...

"Peckish" (cranky, hungry) in "Dingle" (wooded valley)...I never would have guessed it--though "peckish" SOUNDS like cranky/hungry. I'd have guessed "Dingle" to be a slang derivation of "Ireland." Sounds like you had an interesting, and relaxing, visit!

I agree, @Mary Anne, it's a place one can return to over and over...@Charles my info says Ireland became independent in the 20s - and @Peggy it was super relaxing! Thanks for the comments!