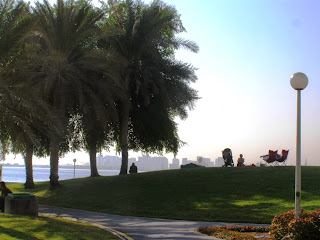 The second most common question we're asked (after Qatar? Where's that?):
Is it safe?
After all, battle lights from Saudi Arabia, Syria, Iraq, Iran and Afghanistan sparkle over Qatar like a halo. The Taliban Five are housed here, those guys the US President controversially freed in exchange for a single American Marine. The five live in our resort "neighborhood," purportedly housed in a guarded, castle-like compound at The Pearl. 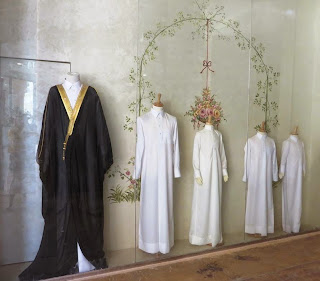 no matter your size, there's a thobe for you
display at The Pearl
The single land route out of Qatar is through Saudi Arabia. Permission to make the trip requires months of paperwork and is usually only given to drive straight through. A woman must be accompanied by her mahram and covered head to toe, even in the car.
There is the questionable treatment of migrant workers, Matthew and Grace Hwang, the unending parade of waste water trucks that disappear into the desert and return stocked with "potable liquid."
Plus, they wear thobes and abayas in Qatar, live behind forbidding ten foot walls, speak Arabic. And they're Muslim! 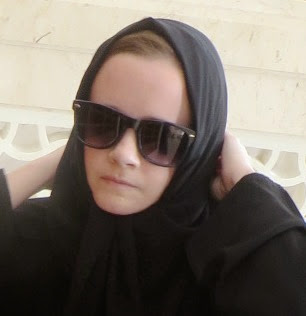 While it's true that there are cultural and ideological differences that sometimes cause conflict, if you read my blog, you already know that Islam is a peaceful religion. And Qataris are, in a quiet, non attention seeking way - Peacemakers. 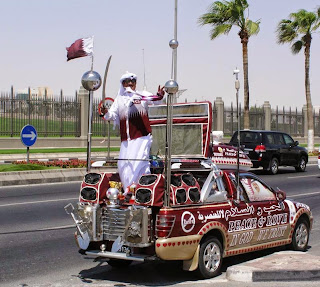 the Peace and Love Guy dances on his truck
in front of the Amiri Diwan
In Egypt, Israel, Palestine, Syria and with the Taliban (who, it's said, have offices in Doha) Qatari leadership quietly broker discussions to further peaceful resolutions to end the cycles of violence. In taking the Taliban Five off the road, after the US President negotiated their release, Qatar assures the men's physical non-involvement in conflict. As the first Middle Eastern country to host the World Cup (in 2022, in case you've been living under a rock), they're breaking new ground in communication and understanding.
Qatar has opened its doors to an expat majority who don't dress, look, eat, play, worship - and sometimes don't even respect - their culture, religion and way of life. Yet, before the roads, water lines and electrical networks had traversed the peninsula, there was McDonalds, Dairy Queen, Chili's and TGI Friday's. A new modern mall goes in, it seems, every week.
There are Christian churches in Doha. And, even though it's haraam in Islam there is a liquor store that sells pork. 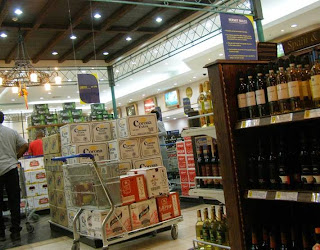 Sure, we feel welcome. But do we feel safe? We respect the culture, follow the rules, keep a low profile. And, yes, we feel safe. 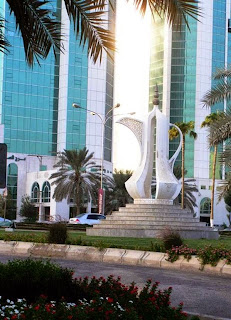 giant pitcher on the Corniche
hospitality symbol
More safe than I feel right now, in fact, sleeping in my bed in America under a US government owned, 40 foot tall, 12 foot diameter dead tree. Paperwork, photos and bids have long been submitted requesting removal of the tree. Meanwhile, its 20 foot partner recently fell, taking out a neighbor's back fence. 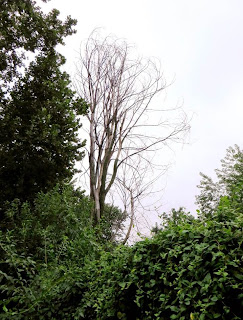 Please Mister President, cut down your tree so that I might return to the Middle East where I will feel safe.
Posted by Lucinda H. Kennaley at 7:28 AM

Trees in my yard that are dead I must see to their cutting (I have one right now). Please tell me how you got the U.S. Government to agree to do the cutting down. Who do I call? I don't mind waiting!
Dad

The monster tree is in the yard of a foreclosed, FNMA owned home. If it falls in an uncontrolled situation the best case scenario is property damage...but who says I've gotten them to take responsibility? It appears they're hoping when it goes it'll break into fireplace chunks and stack itself by the fence line.