East to Midwest Across America

An American journalist is decapitated in Syria, Israel and Palestine bomb one another and racial tension explodes into gunfire in Ferguson, Missouri. Women aren't allowed to drive in Saudi Arabia and prejudice is a way of life in Qatar.
But when smoke bursts from Katie's car outside the Walgreens in Greenville, North Carolina, the world's problems seem very far away. 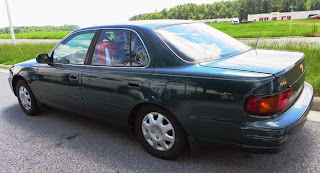 all her worldly possessions trunk to lid
the most important are two thin sheets of paper that say:
"Master's Degree" and "Registered Dietitian"
(car for sale soon)
Something pops and thick brown fluid gushes onto the tarry road. Before we're free of the steaming vehicle, a woman in a black Ford Explorer headed the opposite direction stops. She leaves her own car in the street as I raise Katie's hood. "Yo' radiatah is done, see raht thayah?" She removes the cigarette dangling between her teeth, and uses it to point. "Ya'll goan in the Auto Zone and see they kin hep."
In the Auto Zone, employees with names embroidered into red collared shirts leap into action. Sherwood* proclaims a broken heater hose the culprit as he single handedly pushes Katie's car out of traffic. Sue* calls auto repair shops. The one her sister works at is busy but we "ought to call over to Elronda at the Meineke."
No fewer than seven cars and trucks stop as we wait for AAA on a curb near a field. "Ya'll need help? What's the trouble? Ah noticed you, thought ah'd see you're okay." 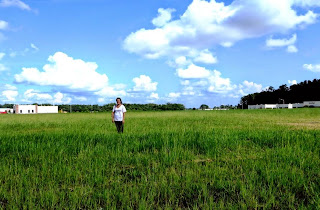 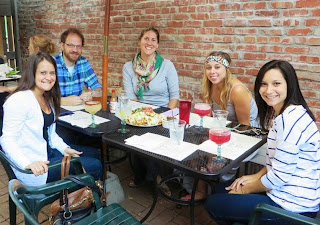 three years together ends
a lifetime of friendship ahead
…Washington, DC with its waterfront, monuments and a beautiful woman who offers weary friends elegant hospitality and soft, pillowed beds. 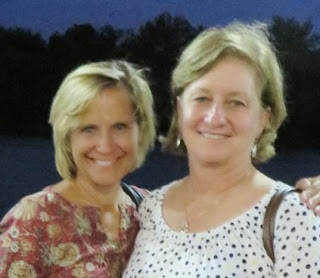 with wonderful Mary Ann
lifetime of friendship continues
There is Angel Gap, North Carolina with log cabin shops under pines so tall that clouds drift in and out of branches. Populations come in both black and white in nearly equal proportions, say "dang, ya'all" and "ah" instead of "I." There are slow moving tractors, freeways, country roads… 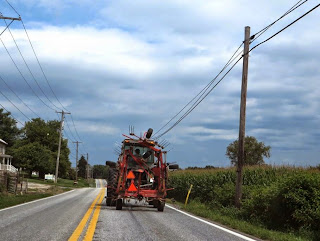 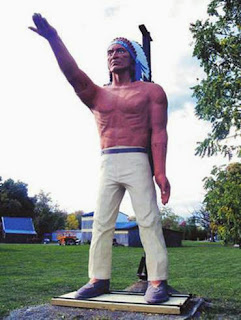 The Post Journal, Jamestown, NY
Fog skitters across dewy highways and the air smells of intermittent rain, sunshine and hay. Road signs announce "Beef and Ice Cream," "When You Die You Will Meet God," "Buckle Up - Next Million Miles." Tiny towns seem to have more churches than people; cows, goats and chickens frolic in front yards.
So. Much. Green. 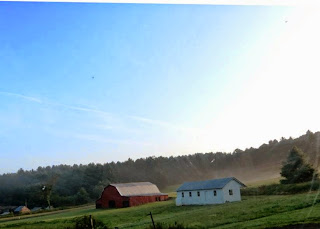 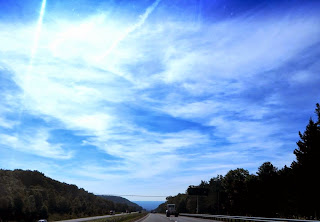 and this
Everywhere, all across the country, billboards feature Starbucks, Walmart, Taco Bell, McDonald's, Burger King and Cracker Barrel's pinto beans and corn bread.
The mountains of North Carolina and the Virginias ease into Kentucky, where horses graze in fields crisscrossed by rail fences; settle into the tree lined hills of Illinois and Missouri - until finally the world flattens and becomes Kansas. 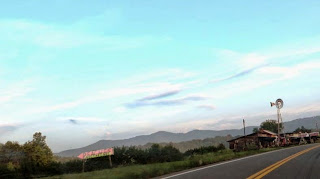 not Kansas
But first Katie's car would need a new radiator, thermostat, battery and Sherwood's hoses.
As the good natured folks at Meineke's manage Katie's car repair (lifetime warranty!), we wander streets without side or crosswalks, eat lunch at a gas station and tour a Sam's Club.
Later, a mother and her four children join us in the Meineke waiting area. "Kin ah have a quarter?" says Little Boy, palm raised.
"It's mah birthday next week," says Little Girl. "Ah'll be seven." She faces me, but nods at Katie. "Ah you her mommy?" 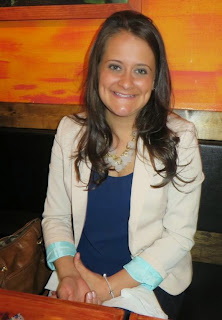 I'm her mommy
It may or may not be true that Americans are fast food fat and geographically illiterate. Perhaps our high school graduates can't pick out Azerbaijan on a map, outline the history of Syria or do simple math - and, in contrast to Qatar's children, most of us *only* speak one language. We have social, economic and employment issues like every other country across the globe.
But where pines march up mountains into blue skies and everyday folks sip coffee while waiting for buses on grassy streets; here, deep at its heart - I think America is pretty dang great.
As her mother and four older brothers watch, Little Girl opens her arms wide and wraps us up. First she hugs Katie, then me.
*true story, real names
Posted by Lucinda H. Kennaley at 12:46 PM

Email ThisBlogThis!Share to TwitterShare to FacebookShare to Pinterest
Labels: Americans, expat life, family, my family, My Life in America

And one of my lifetime friends, Dawn, lives in Mt Airy! But I just saw your message this morning... loved this piece! It sounds like it was a great trip! Love AK

I searched the piece looking for the reference to Mt. Airy. Then remembered: that's where we spent the night - as we headed into the most mountainous passages. Beautiful places, we'd definitely go back. :)