Arabic Calligraphy made out of Arabic Calligraphy
Sheikh Faisal's Museum (of eclectic wonderment)
It was a simple list of Arabic words, neatly typed in easy to read font, evenly spaced and aligned in a column. "What does it say?" said my friend.
I recognized letters, identified familiar words, comprehended general meaning. But understanding shrouded itself in my mind like a fortress sealed for battle. I returned the page in defeat.
"That's okay." She shrugged. "I'll ask someone else."
Ouch.
As I see it, there are four steps to reading Arabic:
1) Identify letters.
The language does not utilize capitals or "cursive," but there are three shapes for each of Arabic's 28 letters, plus vowel markings, dots and sometimes dashes. There's stylized and sloppy writing, contracted spelling, stacking, dropped dots, added curls, lines, circles, hooks. 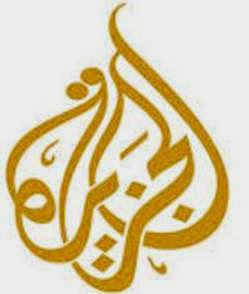 this says: "Al Jazeera"
الجزيرة
this says "Al Jazeera" too
Reading Arabic is often a rousing game of "Where's Waldo" but with letters instead of people.
2) Read the word.
Congratulations, you've located the letters! Now you're in a position to make sounds. In English this is the part where your index finger hovers over diphthongs, blends, consonants, vowels. Is the sound long or short, hard or soft, speak its name or remain silent?
Reading in Arabic requires the same step, only without vowels, which, by the way, do not commonly appear in the everyday literary Middle East scene - ie, newspapers, street signs, television commercials, correspondence, textbooks, event flyers.
"(Vowels) are for babies," said Teacher. "You will understand from context."

Kitty likes her harakat (those squiggles over the letters: vowels)
"Kitten," from an idea by Andrea Dami, illustrations by Tony Wolf, Text by Silvia D'Achille
Oh yeah, you're expected to elucidate vowels when reading. It's just that they're not provided (once you graduate from board books).
3) Comprehend meaning (of individual words).
Way to go! You've identified letters and applied sound. Now you may translate.
Only…factoring in the million or so Arabic dialects, Koranic use, invisible vowels and what happens to meaning when you add "the," conjunctions, prepositions or adjectives…each word in Arabic has approximately 400 different definitions. (I might be exaggerating but only slightly.) Some meanings are literal and unique like, for example, this word:
شعر
which may mean poetry, to feel - or hair - depending upon where your mind applies that missing vowel.
اشعر الشعر و الشعر.
I feel poetry and hair.
Other meanings are less literal, like this word:
فكر
which is pronounced "fakkr" (yes I know what it sounds like in English) and means, generally, "to think" (along with variations on the theme like "contemplate, idea, intellect, consider…")
(When a different invisible vowel is applied) this combination of letters also refers to a prayerful thinking-on-God activity called "fikr" where observant Muslims caress prayer beads and speak God's name over and over. This form of contemplation results in heavenly reward. 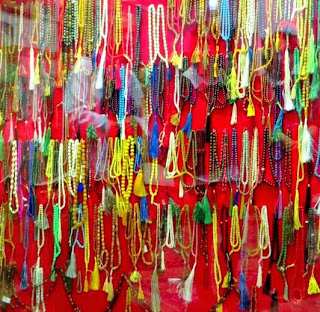 prayer beads
Sheikh Faisal's Museum (of eclectic wonderment)
"One minute of fikr is equivalent to a year of worship, and one hour of fikr competes with 60 years of worship."
Muslim-mind.com
4) Understand.
You've found the letters, recognized words and have a general idea as to meaning. Now, relax. Drink tea. Release understanding into your mind in the way that steam floats from a mug of sweet Arabic coffee to warm cold fingers on a snowy day. 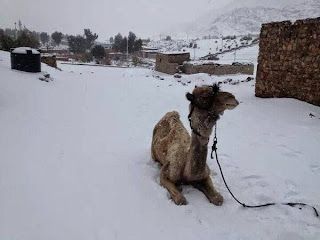 Snow in Egypt, 2013
twitter pic pic by @belharesya
At least that's the idea. 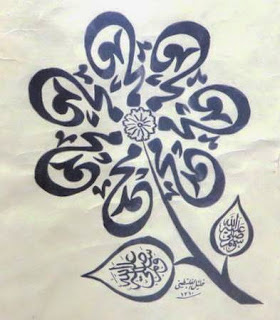 words shaped like a flower
Sheikh Faisal's Museum (of eclectic wonderment)
Hours later, long after my friend and I had gone our separate ways, understanding danced in my head like rain over the Sahara: too late.
Arabic isn't just nouns, verbs, adjectives (and a bunch of other things that don't translate). It's more like an orchestra of colloquialisms strung together by sound. You don't translate as much as absorb the secrets in the melody and rejoice in the harmony of understanding.
But first, you must locate the letters, drink tea - and wait.
Posted by Lucinda H. Kennaley at 4:17 AM

This is poetry!! A child's lesson!! A university class!! Among the best of your, or anyone's posts!!

@peggy: aww thanks!
@Charlie: there you go with those (impossible) to answer q's! I once attempted to volunteer at an organization whose purpose was to promote (Arabic) literacy among local kids. I was told that Q youth learn English from tv, movies, books and prefer it because it's "so easy." The result being the need for that particular organization...