Why I love Arabic 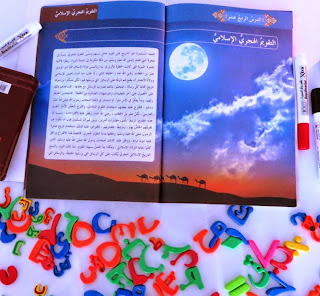 study time
First it was me and the girls from the 5A class, chatting in the hall. The Turkish student didn't speak English so conversation was necessarily in Arabic.
Where are you from? How long have you studied Arabic? How many children do you have? How old are you? What languages do you speak?
Then class, as always, conducted in a rapid fire mix of classical Arabic with a side of Egyptian dialect, garnished in English (but only when absolutely necessary).
And finally, the ladies:
Wahashteenee! I've missed you! How is your health? How is your family? When is your baby due? (Not mine.) Where will you travel this summer? When will you be back?
The Sudanese jewel was a teacher in her country but stays home now. The Moroccan is expecting twins. The Kenyan's first language is English but she learned Arabic in Mombasa where a dialect is spoken. The young girl from Nepal is learning Arabic like me.
I ping ponged through the building, collecting hugs and kisses, laughter, words. One young mother liked my Arabic children's books. A ten year old is learning Arabic in English at her French school. There was talk, reading, writing, explanations, diagrams, corrections and fun.
With a limited vocabulary spanning a narrow range of subjects, I float in a sea of sound in search of the island of understanding. When opportunity for conversation meets a day my brain is (more or less) tuned in, I'm reminded of the many reasons why I love Arabic. Here are a few:

Interesting display near the Convention Center


God is part of everything. When I expressed joy over a friend's pregnancy, she hesitated then said, like a mother telling her child to remember to eat his peas: "say ma sha' allah" (what God wills).


Hospitality is so deeply engrained in the language that it overflows into culture: a greeting must be returned in the same or bigger manner. Kind words are a gift. A smile is a form of charity. The most difficult subject gets an alhum du il allah (praise to God).

There's music in the alphabet: the hissing cat (khal), long breath (Haa), gargle ('ein), growl (ghein), pause (hamza), open throat sigh (Saad), hollow dee (Daad). Sounds mix, flow, surge, rest. One word may mean many different things and an altered tone or pitch, length, vowel choice or the placement of the word or sound in a sentence can change the essence of an interaction. 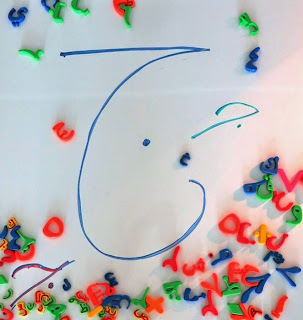 the chameleon "jeem"
makes a different sound depending upon where the speaker is from
I like that differentiation in order or pronunciation is generally chalked up to dialect (and not a slow brain). And that if I talk for more than a minute, someone always, always asks: are you from Egypt?
Qataris cheerfully break speech speed records but Egyptians talk slow and easy. A Syrian can say the exact same thing and I don't understand at all (to my ear it's like the difference between American English and whatever it is Australians speak).
Innumerable dialects add confusion and misunderstanding but also multiply, divide and grow nuance, beauty, mystery, magic, music.
I like the way comprehension doesn't come from a single word but a combination of meaning, form and intonation. And that understanding happens in waves that stream over you like a warm summer breeze. "You must feel the language," says my teacher.
I'm a grammar geek, so I love that there are countless rules and word groups. For example, "kanna and her sisters" and "inna and her sisters" affect sentences in opposite ways. And you only add alef to tanween when it comes with fatha but not if there's an alef lam. I like searching text for mafgool bihee and mansoob and the many different forms of fael. And how Sifa the describer must match moosouf the described in gender, markings, number, grammar. And that majroor follows harf il jar the preposition which predictably - in a seeming morass of unstructured structure - calls for kessra.
And I like that that none of this - none of it - matters once you start talking.

But among the most important reasons I enjoy Arabic: I like the ladies. 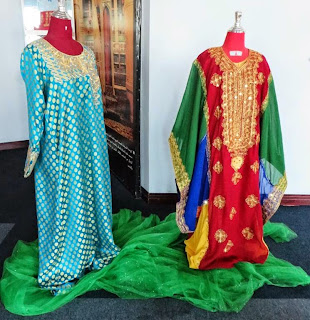 
The woman in abaya and sheer red and yellow hijab sat in an empty classroom, Arabic Koran and notebook open before her. Sabah al kheer, I said. Good morning.
She blinked.
Kayf ilhal? I said. Izzayik? Chismich? Hatha ghorfa f-ay mostawa? How are you? What's your name? Which class is this?
In a lilting Indian accent, she replied in English. "No, no. I'm in the Islam class, so I only read Arabic. I don't know what the words mean." She took my level 4B Arabic book, slid a finger below individual words as a Kindergartner recites from a primer.
"You see? I can read." She shook her head. "But no meaning. Yet."
Ahhh. Her fun is just beginning.

Posted by Lucinda H. Kennaley at 9:44 AM

Aha! I have the image of you running through the building collecting hugs and kisses. It fits you like a pair of tights!
Dad

You have a real talent for describing the way Arabic feels.

I work as a volunteer with your college roommate, Mary Ann. She me told me about your blog and I greatly enjoy it.
I am also a student of Arabic. I envy your opportunities. I mostly deal with stressed airline passengers--not quite the same.
Jim

Thank you Jim for the nice comment. Mary Ann (writes) highly of you! I'd bet you have much MUCH more opportunity for Arabic conversation in a USA airport than I get living in Qatar, Middle East. :) If you want to practice Urdu or English, however, this is the place to be!
Thanks again, Cindi