Charles Hedrick Birthday and Poetry Month: Ode to the Mundane 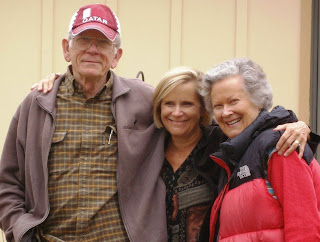 Charles and Peggy Hedrick (and me)
"The most effective poems are those in which the poet is sharing an experience in heightened language…objective of poetry is to be understood…the author's meaning, however, does not control the poem once it is published. At that point it belongs to the reader…"
- Charles Hedrick
Charles Hedrick has a PhD in Religious Studies from California's Claremont Graduate School. He's an author, pastor, army chaplain, professor and linguaphile who's appeared on tv, consulted for films, worked archaeological digs and travelled the world where he's "hobb-nobbed with some near celebrities." His resume is so long it's properly called a Curriculum Vitae and gets its own web space. His books and articles cover a variety of thoughtful topics, including God, the Bible, spirits, church, religions and much more. To learn about Charlie and his fifty plus years of doctoral theological linguistic authoring travel and rabble rousing check out his blog and website:
Visit Charlie's blog at http://blog.charleshedrick.com
Go to Charlie's website at http://www.charleshedrick.com
This great man is also my dad and April is his Very Important Birthday month. As all Charlie ever wants for his special day are socks and poems and I'm too far away to pony up the argyles - I've posted April's blogs as 80-word poems in his honor. This is the last of four entries. I hope you've enjoyed it as much as I've been challenged by it - phew, poems are hard!
Happy birthday Dad! 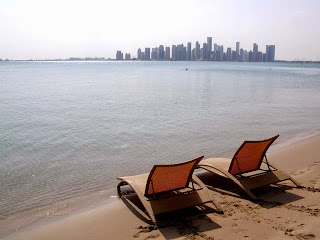 Doha's Expat Wife Life
Ode to the Mundane**
(Song of an Expat Wife)
Woebegone endeavors,
Deported bureaucrat:
lift weed tote cart walk; here
there's someone to do that.
Thou vanquished commonplace,
Exquisite everyday.
What thy presence giveth,
absence taketh away.
Unbiased taskmaster,
O virtuous mundane.
Parts once winsome mighty,
now jiggle sag complain.
Ordinary petty,
prosaic humdrum life.
Pedestrian plain tasks
elude this expat wife.
Concealed behind this hedge,
no capricious whimsy.
Hiding from helpers who'd
whisk my humdrum from me.
Truant common chores plus
sedentary gnome, in
languorous malfeasance,
carries groceries home.
**I don't speak for all expat wives, many of whom find a way to maintain muscle tone without benefit of the great and glorious everyday mundane. In fact, some expat women don't miss scouring, scrubbing, mowing, weeding, or sticky-papering-the-cabinets at all. Like, for example, those who travel with children or work regular jobs while living abroad. Plus, even if everyday tasks existed here in Doha, once traffic years were factored in even the most ambitious spouse-on-duty wouldn't have time to complete them. (Doha traffic is the real reason that God invented maids and nannies...but that's another blog for another day.)
Posted by Lucinda H. Kennaley at 4:09 AM

moved my thoughts in a new direction. Our Maadi year--the pressure from our Bo-ab, to LET HIM DO HIS THING!! It took time to learn what activities were relegated to him --and our, i.e., carrying things to the car ourselves, in the a.m., on our way to a day of working in the Museum--was, or could be, disrespectful. Depending on... ? I LOVE it that you, Bob, and your children are having the Qatar experience!

Where does its honor, great and glorious Mundane, appear in your Pantheon of the Commonplace and Mediocre?
Dad