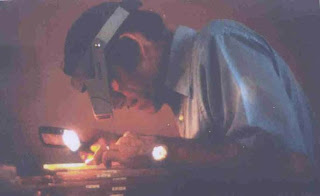 Charles Hedrick examines a 4th Century Coptic manuscript
Coptic Museum, Cairo, Egypt
c. 1974
Today marks a Very Important Birthday for renown Bible scholar, theologian, author, teacher, celebrated rabble rouser and poet, Charles Hedrick. In honor of this great event, I offer 4 blog posts as 80-word poems (I'm not saying which, but one of these numbers is significant to Charles's birthday).
To learn more about this great man I get to call Dad:
Read Charlie's blog at: http://blog.charleshedrick.com
Visit Charlie's website at: http://www.charleshedrick.com 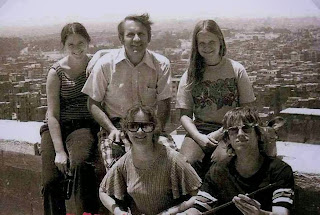 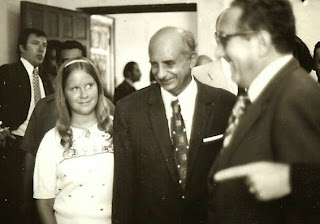 Expat kid meets Henry Kissinger (sort of)
Coptic Museum, Old Cairo
On Growing Up Overseas
They're army brats like my mother, the lawyer, Peggy Hedrick (visit her popular website about all things law here: http://www.peggyhedrick.com). They're children of ambassadors, oil execs, teachers, contractors, doctors, missionaries and scholarly PhD's working on the translation and conservation of ancient documents found in remotest regions of the Arabian desert.
Expat kids come in all nationalities, colors, shapes and sizes and are found in interesting places across the planet, including Doha, Grand Rapids, Los Angeles, Taipei and more. They play soccer in Paris on Tuesday and debate in London on Thursday. They speak English, Arabic, French and German before breakfast and ride streetcars to school.
It's a charmed life with an edge, as a Scottish-American-Doha-expat-married-to-a-Texan-raised-in-England-with-three-children-born-in-three-different-countries-looking-at-colleges-in-Holland-Switzerland-Colorado-Texas reminded me: expat kids experience the world, but miss out on family stuff other kids take for granted. Like stopping by Grandma's after school for a hug and snack, weekend overnights with cousins and tough talking Harley riding across the street neighbors named Shane who will scare off the bad guys and may or may not have changed your diaper.
To some expat kids, ice cream with Grandma is right up there with the weekend safari and China's Great Wall.
Expat kids are as different as grains of sand in the desert. But whether the overseas period lasts a year like mine, my sister's and brother's or an entire childhood - there are two things the expat kids I know seem to have in common: tales of crazy what-were-you-thinking life altering adventure; and an understated appreciation for the uniqueness of the opportunity until it's long past.
Because when you're a kid, whether living abroad or at home, it doesn't matter if you're waterskiing Table Rock Lake, Missouri or Doha Bay, Qatar. As long as you're loved, scaling Giza's pyramids and learning to milk a dairy cow in the U.S. landlocked Midwest are, well, just - part of life.
Happy Birthday Dad! Sorry (again) about the horseback-riding-Sahara-City thing. And the Beatlemania thing in London. And lots of other things. You're pretty awesome for a rabble rousing 4 or 80 year old. Thanks for loving me no matter where we are in the world.
Posted by Lucinda H. Kennaley at 12:00 AM

Nothing much better than being an x-pat kid -- unless it's having kids and grand kids who are ex-pat kids and/or just plain ex-pats-- and proud of it!

You do me a great honor! What did I ever do to have a kid like you? [I mean that in the very best way]
Dad

Reading your essay again, a week plus after than the first time --brings back new memories, and reminds me of my excitement when MY kids had their ex-pat year!