What Happened on the Plane 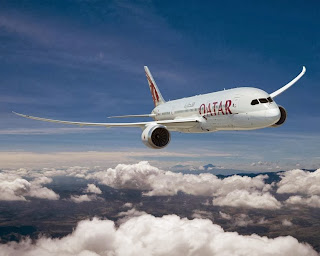 "…'mixing' and 'interaction' happened everywhere during the time of the Prophet (peace be upon him): in the mosque, in the street, in the market, and everywhere.  The idea of segregation of sexes was simply not there…"
Tucked into my aisle seat, I watched passengers board.  It was my first time to sit in the center three seat section on a long haul flight.  Away from the cozy hollow near the plane's wall.  Exposed in the middle, without the window's comforting light.  Who would sit beside me this time? 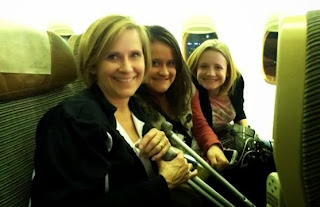 first trip to Doha, Dec 2011
Katie, Kimber, me, cozy window row
Usually my long haul seatmates are readers, sleepers, armrest sharers.  I've also sat beside the mother with two fidgety babies; the girl who talked for hours in a high pitched screech.  The woman who put up a passive aggressive, across the world battle for the armrest; the smelly man.  There have been spillers, elbowers, climbers, wigglers, talkers, borrowers, snorers, eaters.

I'd never refused to sit beside anyone or had someone refuse to sit by me.  Until now.
An acrid scent, a man in the aisle.  He raised his arms to stow his luggage and a heavy body odor smell filled the space.  He glanced at his ticket - and took the middle seat in the row behind me.  I adjusted my air vent.
A small man with a long, dark Islamic style beard and white prayer cap appeared in the opposite aisle.  He wore slacks, a vest.  His bone structure, dark skin and hair identified him as Arab.  He glanced at me, stowed his bag and slipped into the aisle seat.
"Trim your moustaches & let your beards grow…"
a narration of the Holy Prophet (saww) by Al-Saduq
"Sir, your seat is in the middle," said the attendant.  She pointed to the spot next to me.  "You'll need to move."
Air jets hummed, engines rumbled.  The plane vibrated, hissed, squealed and clanked.  The man said something I couldn't hear.  The attendant glanced at me, nodded, "but you're in someone else's seat."
He stared straight ahead.  After a moment, he slid into the space beside me. 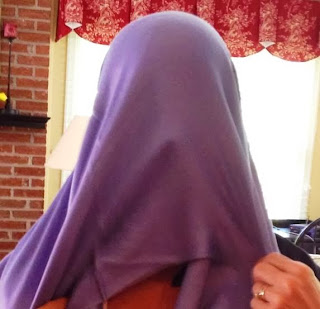 Some Muslim men do not want to shake a woman's hand.
-Asian Muslim woman living in Qatar
I tugged at the vee in my long sleeved blouse, pulled my jacked closed. My elbow grazed my seatmate's arm.  He didn't flinch.
This could be my longest 17-hour flight yet.
"A woman should not look at or speak first to a man.  (But it's probably different for you because you're from the West.)"
-Indonesian Muslim woman living in Qatar
A young, jeans-wearing Arab man plopped into the empty aisle seat in my row.  My neighbor turned and spoke quietly.  I watched the young man's face as his eyes widened.  He glanced at me, looked away, nodded.
My seatmate crossed in front of the young man, motioned him forward.  Animated conversation, gesturing - and the two men disappeared. 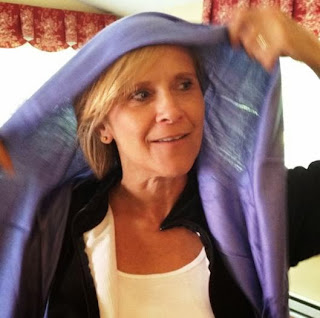 Who decides the extent to which a woman covers?  She does.
-Qatari Muslim woman
A toddler peeked over the headrest in front of me.  A baby cried.  Overhead compartments snapped shut.  Window blinds slid open and closed strobing sun and shade.  The attendant offered me a pre-flight jolly-rancher style hard candy.  I popped the tangy sweet into my mouth.
My seat jiggled.  The young, jeans-wearing Arab plopped into the space beside me.  I peeked around him.  A Western attired Asian man now occupied the aisle seat.
The young man's name was Sultan.  He was 26, from Saudi Arabia and this was his first trip to America.  He was headed to a 4 month, live-in language program in California to learn English, after which he'd return to Saudi Arabia for college.

We spoke about the difference between the Arabic of the Koran and street Arabic.  And the value of learning a new language.
"It is important to know English," he said.  "For business."
"At Hajj men and women pray side by side."
-American Muslim woman
Over the next 17 hours, Sultan and I were joined at the armrest.  Our shoulders touched.  My shoes shifted into his space.  His pillow landed in mine.  He jolted in his sleep and elbowed me in the head.  I dropped a roll in his lap.  We shared a pen.
But when he needed to stand, he climbed into the aisle away from me, even when it meant straddling a sleeping passenger. 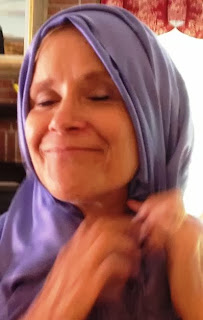 "…Islam forbids mixing between the sexes that might provide even the remotest possibility of temptation…"
I watched 5 full length movies, an entire season of Big Bang Theory and multiple episodes of Modern Family.  I ate two shareable sized bags of M&Ms all by myself and asked the attendant for water so often she brought me a liter sized bottle.
Sultan slept.
Many meals, snacks, clogged sinuses, sore knees, trips to the bathroom and kitchen later, I helped Sultan complete his landing card.
"What should I see in America?" he asked.  "Los Angeles?  Las Vegas?  The beach?"
"Yes!" I said.  "And attend a live tv show."
"Thank you," he said.  He smiled.  And then -
he shook my hand. 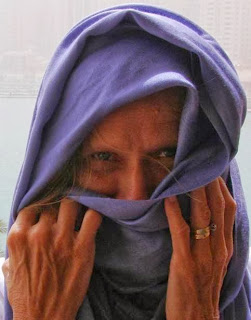 "Women are revered in this culture."
-American Muslim woman living in Qatar
Posted by Lucinda H. Kennaley at 8:56 AM

Raises questions I hadn't thought of. Ever. You handled things well. My last trip to Egypt was in 2001 --and I really think things were different then. An American --older-- woman would still be given more leeway sitting between Muslim men on a long, overnight, trip. (??)

This is fascinating, Cindi! You are gaining much insight during this overseas experience. I've enjoyed reading all your posts. :)

Thanks so much for your comments!! Cindi