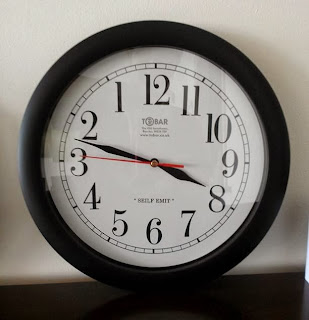 Moment One:
Cars stream across the road in front of me - traffic moves just one direction at a time in Doha.  When the light facing the flood turns red, a wall of wheels forms a blockade across the intersection.  Now the light is green for those headed left into the barricade.  Vehicles nose forward, plugging holes in the sea of traffic.  The light changes again - and those headed the other direction surge into the morass.  The road is now flush with vans, trucks, sedans, SUVs and exhaust saturated air.  An orchestra of honking horns, squealing brakes, humming engines serenades idling travelers.
At the heart of the clog, an SUV's door opens and a man in white emerges.  He adjusts his headdress, smooths his dishdasha and steps boldly into the swell of bleating steel.  He points and cars back up.  He waves and cars move forward.  His raised arms and billowing robe are shadowed by the sun shining through the passage he creates.  He reenters his SUV and disappears into the gap, trailing cars like animals in the Ark.
My light turns green and I slide through the wall too. 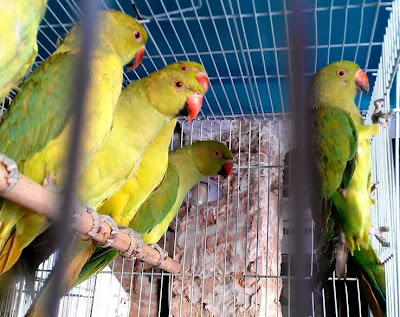 Bird Market, Souq Waqif
"What, me escape?  Nyahh."
Moment Two:
"There are no wild parrots in Doha," says a shopkeeper at the bird market.  But I've seen them up close:  long green tail feathers, round heads, orange beaks.
Evening near Bob's job site; me and my camera comb the darkening sky.  The birds travel at dusk, headed toward the souq.  Dots on the horizon, flapping wings.  Feathers pull close to strong bodies as birds swoop high and fast over the ground.  First a small flock speeds over the sandy lot.  A set of two follow, then three together and one alone.  Like a gang protecting the slower members, a final company zips by.  I blink and they're gone.
Too fast for pictures. 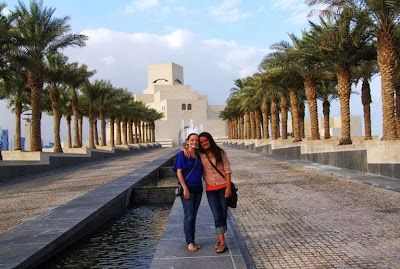 Katie and Kimber outside Museum of Islamic Art, 2012
not related to anything in this blog, I just like this pic
Moment Three:
The musky smell of Bukhoor wraps me in a cloud of sweet.  My hostess heats coals in the chalice-like device.  She adds a perfume square and a dark mist rises from the vessel's foil lined hollow.  She places the receptacle under my shirt, holds it there until smoke drifts through the fibers of my blouse.  She removes the chalice, drawing a fragrant circle around me, over my hair.
It's the traditional goodbye after my first ever visit to a Qatari home.  Here there is sweet tea in tiny porcelain cups, smooth mango juice, spinach in pita, Omani candy and tasty Arabic cookies.  There is beauty: marble stairs, wood covered columns, crystal chandeliers, down comforters, fiber wall hangings.  There is home: shoes at the door, pillows on the floor, phone calls, family photos, great conversation and children who greet strangers with kisses. 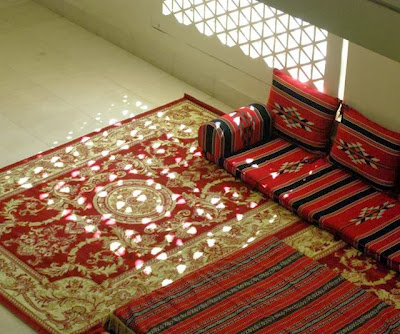 sitting area at Weil Cornell Medical College, Doha
Moment Four:
Behind the wall, in the front yard of the beautifully appointed, villa style home, there is a garden, a bamboo majlis, an outdoor bathroom - and a multi-story chicken coop for roosters and hens.  There is a Little Tykes slide and swing set for the children.  There is a special place for grandma to sit while she feeds the birds and watches her babies play. 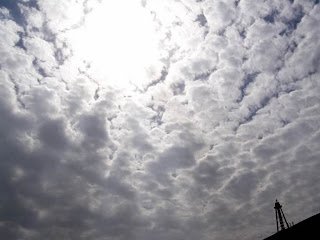 clouds in Doha: rare sight
Moment Five:
On the floor, knees crossed and elbows down, I play with the kids in a Qatari home.  Six year old Maryam draws a feel-insaan (elephant person) and the Arabic alphabet in pencil.  She is learning to read and write Arabic, like me, in the same way an American kindergartener studies the ABC's.
All around us, ladies chatter.  Tiny porcelain cups clink against plates.  On a wall, an Arab game show broadcasts on a wide, flat screen tv.
Maryam sits tall, says in perfect English, "I will test you."  She holds the paper, drawing side to her chest, says, "Say the letters."
I neglect to include kaaf.  When it's her turn, she forgets Saad, Daad.
"Arabic is called the language of Daad," says Maryam's mother.  "Because no other language anywhere in the world has this letter."
Maryam and I practice until we each recite the letters perfectly. 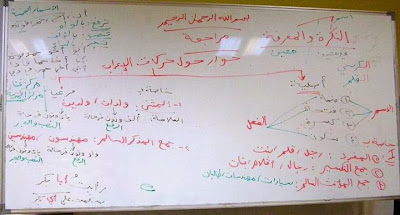 psh, easy
Posted by Lucinda H. Kennaley at 2:30 AM

It reminds me of Wallace
Stevens and his "Thirteen Ways of Looking at a Blackbird," except you have more words and pictures.
Dad