Show Me the Money

I pressed the button for teller services and took my number from the wait-your-turn machine.  I sat in the middle of five rows of metal and foam and watched for my number to appear on the electronic board. 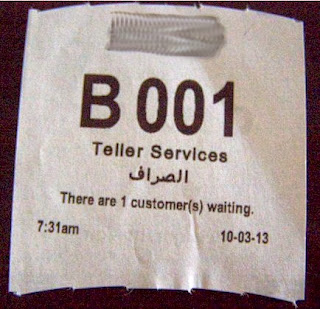 You didn't really think I'd take a photo inside a Qatari bank and post it here, did you?
I gave the man behind the bullet proof glass my passport and payroll check, endorsed the middle of the back by writing my full name, cell phone number and adding my signature.
The cashier slid a stack of bills under the glass.
What about the coins?  "And the fifty dirham?"
He raised his shoulders and shook his head, the international gesture for "ma'alesh - it doesn't matter."
It seems that this bank, like Qatar's grocery stores, clothing outlets, H&M, McDonalds, Fridays and Turkey Central Restaurants don't "do" coins.  Like most establishments here, they simply "round to the nearest riyal" (or thereabouts). 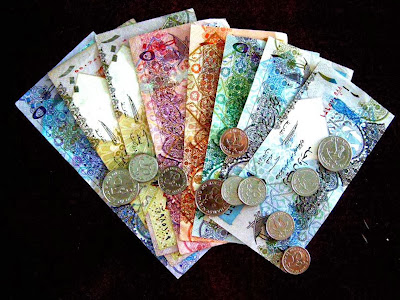 Money money money money
Qatar's paper money is called the Qatari Riyal (QR).  It comes in denominations of one, five, ten, fifty, one hundred and five hundred notes.  Coins are called dirhams (dh) and come in coins equaling 1, 5, 10, 25 and 50.  It takes 100 dirhams to make one riyal, and there are 100 one riyal notes to every hundred riyal.

Fifty and twenty-five dirham coins
We don't own any 1, 5, or 10 dirham coins.
A short history of Qatar's currency system:
Until the 1950s Qatar was a British protectorate and traded with the Indian rupee.  In 1965 Qatar and Dubai formed a currency union with money called the Qatar and Dubai riyal.  In 1973, after Dubai joined the United Arab Emirates, Qatar established its own Central Bank along with a new form of the riyal.  This currency is still in use.
Generally speaking, "rounding" in Qatar means that if your total due includes coinage and the amount owed is 51 dirhams or more, the amount due equals the next riyal.  If your total coinage due is 49 dirhams or less, your debt is to the riyal indicated:  21.49QR equals 21QR owed, but a 21.51QR bill becomes 22QR.
If your purchase amount is 15.10QR, and you hand over two tens, expect a five note back.
If your total comes to 15.75QR you may pay with 20 and get 4 Riyal back.  Or you can pay with a ten, five and one and receive no change.
If your total due includes a bull's-eye 50 dirhams, there will be change.  IF you ask.  IF the cashier has it.  And IF he/she is so inclined.
Of course, you can always pay to the riyal and offer the shoulder roll for the difference.  Ma'alesh.
Lately some shops frequented by penny conscious, where's-the-rest-of-my-money expats like Megamart and Forever 21, have begun dispensing exact change…sometimes. 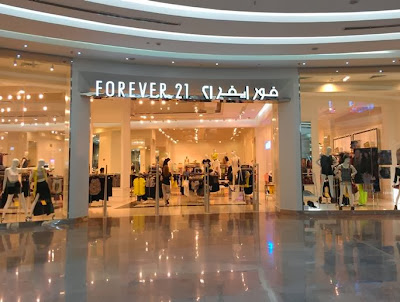 Now showing at Ezdan Mall
(for Katie and Kimber)
What's the big deal?  It's just 50 dirhams.
In fact, we have lost many riyal to rounding.
As for the bank…if my 50 dirhams entered a pool that included 500 customers/day, that's 250QR ($68.68USD).  Multiply that by 6 days/week; that's $412.09.  Now figure this amount over a year and factor in the bank's branches (let's say there are ten to make it easy).  That's a cool $49,450.55/year.
Some say the reason for the rounding is that locals didn't like the heavy money taking up space in pockets and purses.  Others claim that there's a shortage of dirhams.
But, hey, it's all good.  Mafee mushkilla - no problem.  It's true that most businesses here wave the customer off when it comes to doling out exact change.  But some local shops give out sweets instead of coins.

Coins are on their way out in the USA, too. Interesting.

Hmmmm! I would find such a system quite frustrating! Not even in Egypt did such things happen. The piastre was importand to the street vendors.
Dad