WARNING!  This post includes photos of a giraffe giving birth.

This way of accounting for time is pretty typical around here.

While we waited, we thought we'd check out the giraffes, visible from outside the zoo.  Imagine our surprise to see this: 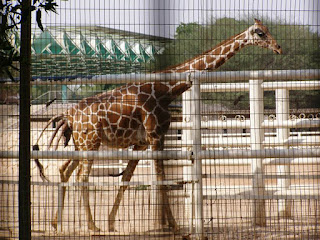 No zookeepers.  No spectators. No one around at all, in fact.   Just Bob and Cindi and this little family. 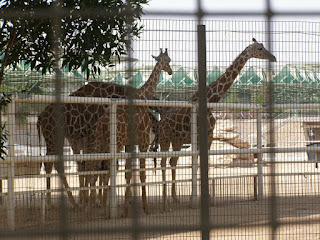 Mama stood.  Mama stared.  Mama paced.  But Mama didn't seem to be in distress.   At one point, she disappeared into the giraffe's barn.  When she came out, the baby's head and shoulder were visible.  And the line of spectators had grown.

(nothing happens in the video, but you can hear lots of Arabic!)

Still only the tiniest movements from Baby and not a sound from Mama.  The human side of the fence considered the possibility that we were recording a Very Sad Event.  When Mama lifted her tail, and the (comparatively) little guy slid 8 feet to the ground only to lay there unmoving - we were sure of it.  One by one, the line of spectators disappeared…until again, it was just Bob and Cindi. 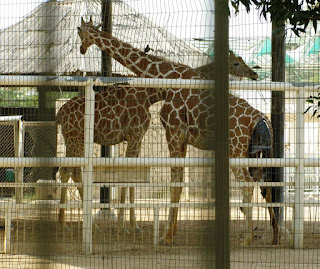 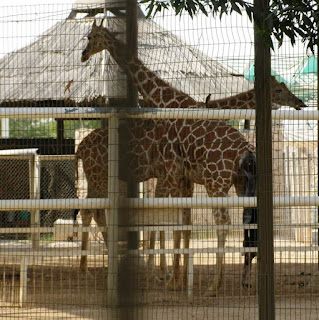 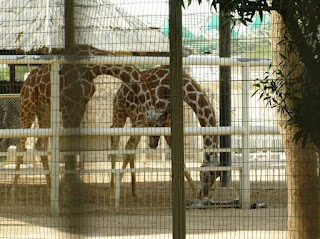 About 30 minutes after this inauspicious arrival, the little calf (female, according to a zookeeper a couple of hours later) lifted her head and smiled. 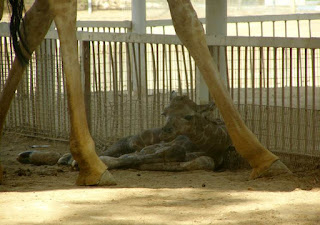 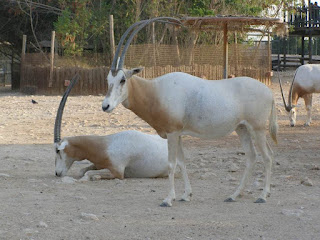 But what about our baby giraffe? 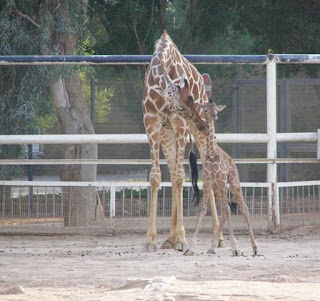 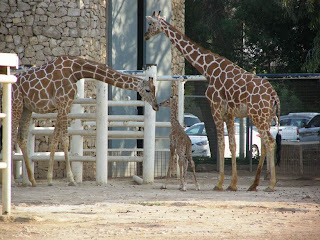 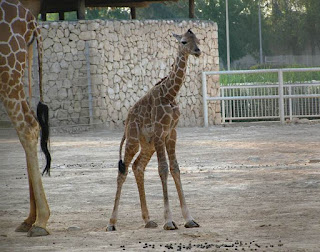 A pregnant giraffe weighs as much as 2,000 pounds. Giraffes deliver standing up - if mother lays down, she might crush the baby!  Her pregnancy lasts 15 months.  Baby stands around 6 feet tall and can weigh up to 150 pounds at birth!  (Just like us humans), it takes hours for baby to arrive.  At delivery, calves drop 6-8 feet - thud sploosh - to the ground.  The fall breaks the umbilical cord, impels baby to breathe and is an important, natural biological event.  Even so, not all calves survive the fall.  Calves lay unmoving after delivery.  This is when babies are most at risk for predator attack.  Mother licks her calf while circling to protect it.  It is most unwise to approach a pregnant and/or new mother giraffe!  Mother giraffes are nurturers and protectors and can take out a predator (or stranger) with one swift kick.  Baby stands and nurses within 1-2 hours post arrival.  Newborn calves are indistinguishable from 1 week old calves - they're both still learning to walk.  In the wild, giraffe calves hide for a while after delivery.  At the Doha zoo, keepers close the area until they can entice mother and baby into the barn, where they'll stay until all the nosy foreign gawkers leave. 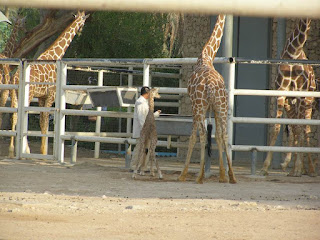 Interesting! The WORLD needs to see this. Mom