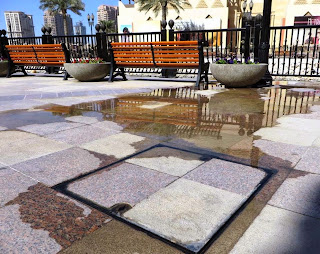 smells bad
very, very bad
Where many people are packed into a small space, infrastructure is a work in progress and smoldering air sizzles, there will be smells. And if you're sensitive to scent like I am, you know that odor has a taste. Sucked through the nose and pulled toward a hungry, absorptive tongue like it is.
"...Qatar's population hits 2.2million..."
Qatar Living
For example, baked trash smells sweeter than cooked sewage. One is moldy apple cores, bananas and meat - a noisome dog food pie. The other is sweat, excrement and vomit served up in a savory latrine casserole that's simmered for days under a hot desert sun.
There's not always a visual clue identifying an odor's source. No piles of trash, sewage dumps, diaper pails, waste mounds. Because when it comes to dusting, cleaning, scooping, shoveling, taking-icky-stuff-away, in Qatar there's someone to do that. Here, malodorous flavors lurk, skulk and creep. One might be jogging along, enjoying the sunshine and colorful, just planted petunias when the heady bouquet of redolence drifts into range. Or descends in an invisible cloud like fetid smog.
When the rogue's source is apparent, it's generally a waste receptacle (empty or full), men's bathroom, men's prayer preparation space, an unmarked, clean appearing structure tucked into a corner. Or a truck marked "sewage" its hose an elephant's trunk pressed into the sidewalk. Where non potable liquid is drained from an underground cavern and hauled off to wherever smells live in the desert.
"...Qatar produces around 7,000 tons of waste each day..."
Dohanews.co
Less than 100 years ago, Qatar was an expanse of desert dotted with low prickly shrubs and limestone. Camels roamed the southern dunes and northern mesas. Bedouins camped in tents amid a sandy landscape marked by mangroves and rock. The hot air was ripe with the scent of oven roasted sand, wet camel, moist dung, salty sea, perspiration, perfume-sweet incensey bukhoor.
Today Qatar is a country under construction, its infrastructure persistently stretched to accommodate an ever increasing workforce population. As on any country-sized job site there are country-sized job site smells: engine fumes, exhaust, chlorine, smoke, sweat, coffee, cigarettes, portapotty.
Qatar was "...recently recognized by the World Health Organization as 2014's second most polluted country in the world (after Pakistan)..."
Al Arabiya
Oh sure, it's not all bad. There are flavorful restaurant aromas: oil, beef, chicken, shwarma, fresh bread. And (if you breathe toward the Gulf while standing in the desert or along the coast) delectable summer scents: sunshine, grass, flowers, fertilizer, fish, salt, sea.
But in Qatar today? Nothing beats the odiferous taste of sewer in the morning. 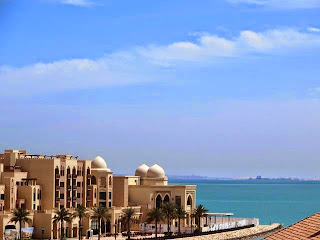 lovely day in April 2014
The Pearl, Doha, Qatar
(all senses not displayed)
Posted by Lucinda H. Kennaley at 10:20 PM