Camels on Main Street, TP in the Can 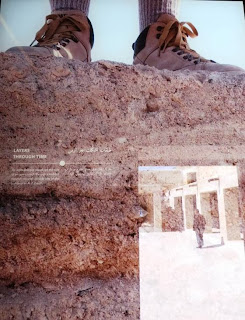 display inside Zubarah Fort
reflection of the fort's interior
At the Northern tip of Qatar, the desert is sand and dirt with shallow pockets of green, waving grasses. The winter earth is marked by yellow, blue and rose colored flowers. Here, when conditions are right, families comb the brush searching for truffles. 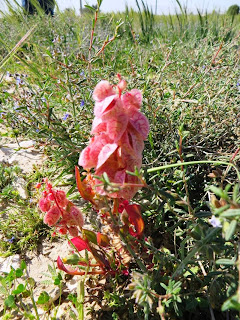 truffle hunting
desert near Zubarah
Where the land drops away a shore rises, dotted with tiny cone-shaped shells and circling an emerald sea. Nearby is an area pocked with mounds of sand that shield what was once an old pearling village. And standing guard over everything: Al Zubarah Fort. Four walls linked by turrets. A tall door with a smaller door inside it. Visitors may climb into the towers, sit on a cannon, peer into a deep, black-hole well.
The old city was abandoned in the 1800s. The fort was built in 1938.  Hardly a relic by Egypt-has-the-pyramids standards. Still, visiting the area makes for a nice family day trip. 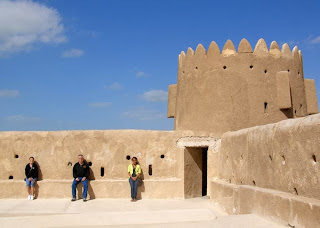 Kimber, Bob, Katie
inside Zubarah Fort
January 2013
We've been to the fort more than once: an hour's drive into the desert. Lunch in the car surrounded by sand. Twenty minutes inside where we'd peer through (weapon holes) at the sea and wonder at the ruins of the old city.
No one can say "This is how it is in Qatar." One can only note "This is my experience in Qatar today."
It seems that since our last trek into the desert, Zubarah Fort was named the country's first ever UNESCO World Heritage Site. Where once was an empty courtyard, blank rooms and unexplained curiosities, are now signs, interactive maps, displays, photographs, informational materials, puzzles, Legos, tours - and a bookstore! There are security guards, an emergency station, tents, majlis style exhibition space…and a huge, active archaeological dig site. 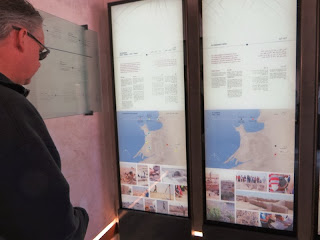 Bob reads up
inside the Fort 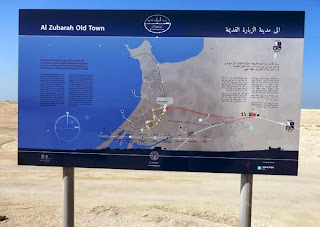 map of the dig site 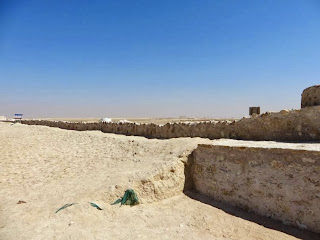 rebuilt section of the city wall 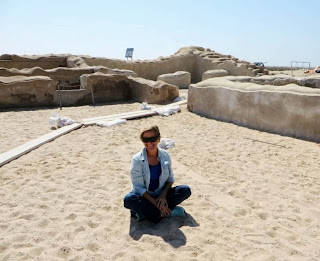 inside an excavation space 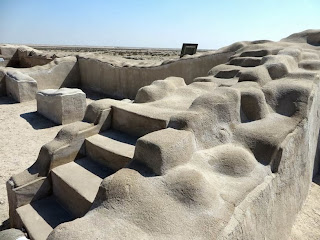 porous stone is covered with lightweight concrete as protection
from the effects of sand and wind
More than a casual trek up country, a tour of Zubarah Fort is now a fascinating adventure into the history and culture of Qatar. 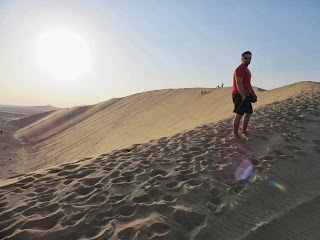 unrelated photo I like of Chris
at the singing dunes
January 2014
When we arrived in Doha less than three years ago, wind worn streets were flanked by mounds of sand. To escape the ever present crush of traffic, frustrated drivers drove over narrow brick sidewalks and stone medians - and on the wrong side of the street too. Road names changed regularly. A recording played bird calls through speakers tucked into tree branches. Public restrooms featured sanitary spray hoses instead of paper - and if you brought your own tissue you were expected to drop it into a trash can, not flush it. 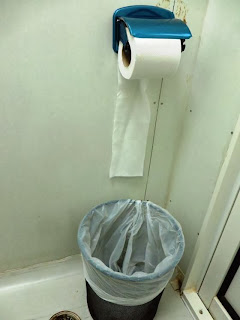 the can is for used tp
yes, really
Communion at the Catholic Church meant crowds of people climbing over one another to queue for Jesus in a horde shaped clump - waiting-in-line Middle Eastern/Asian style.
Today, an evolving infrastructure offers means to nurture broad swaths of color along multi-lane streets. Some homes and businesses display actual street and building numbers. There may not be structure to the lining up, but there is order during communion. Palm trees play Simon and Garfunkel tunes instead of birdsong and it seems that winged creatures - and trees! - are everywhere. 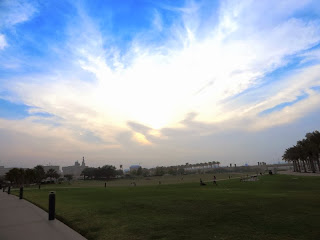 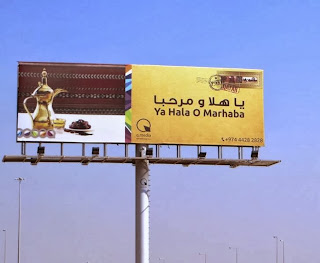 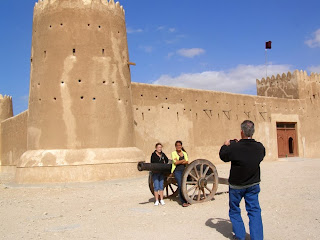 Kimber, Katie, Bob
before UNESCO
Zubarah, January 2013
and a UNESCO World Heritage Site  - with a cannon. Top that, Egypt!
Posted by Lucinda H. Kennaley at 1:58 AM

You are making SO much of the terrific opportunity to experience a really unique, and interesting place!!! I want to holler from the rooftops--"LOOK AT THIS WEB SITE --AND GET TO KNOW QATAR!!!" Nine trips to Egypt -- and I know that Qatar is not Egypt. But Qatar is an incredible laboratory for a people moving into the 21st century.

Sometimes civilization only adds gaudiness to the ancient sites and ruins the isolated experience for the visitor but it also adds protection for the site. Hmmmmm! Do you mean that an isolated cannon rivals the pyramids? ("Top that Egypt!").
By the way who built Zubarah Fort and why did they build it?
Dad

(tongue in cheek) sure Egypt has all that old stuff, but Ferrari is (historically at least) poorly represented. Qatar (now, with recognition) has old stuff and Ferrari too. Here's a wiki link to the history of Zubarah (meant to include it, sorry!): http://en.wikipedia.org/wiki/Zubarah. And the official archaeology site page: http://www.alzubarah.qa/