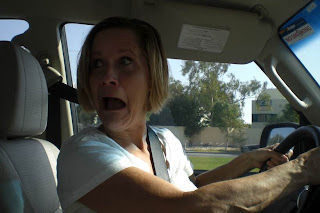 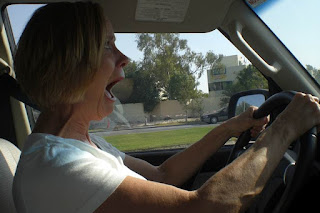 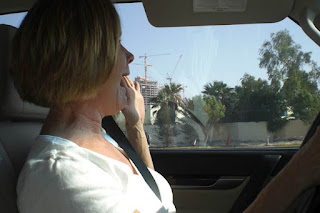 There is: speeding, racing, backing up in traffic, middle of the street u-turning, curb jumping, stop and going, sidewalk driving, sidewalk parking, cutting, passing…and making a lane (on the highway) where there isn't one.
Lost on a side road a white Suburban fills your rear view mirror, flashes brights, blasts horn: "get out of the way!"  You're thirty cars from the green light when the Explorer behind you honks, gestures: "move!"  Wending through a full parking lot, you are blocked in with nowhere to go but over a curb and into traffic.
Roads are structured around a series of circles called roundabouts.  Three lanes pinwheel about a grassy mound until luck and momentum spit cars out the other side, hopefully at the desired exit.  There are no left turns between roundabouts, so choosing the wrong exit can mean 30-45 minutes of circling - lost, but not lost (you can see where you need to be, just can't get there).
Road blocks, blockades, diversions, lanes that end suddenly.  New street names.  GPS does not match reality.  Roads where there shouldn't be and no roads where there should be. Cars stopped in the street waiting on restaurant takeout.  Cars parked higgledy piggledy everywhere, including what might be, you're not really sure…the middle of the highway.
Traffic police in bright yellow and green vests sometimes facilitate movement on clogged roads. Speeders are "flashed" by orange and yellow striped cameras at select intersections. (Citations are issued "virtually" - remember to check online to see if you got one…) 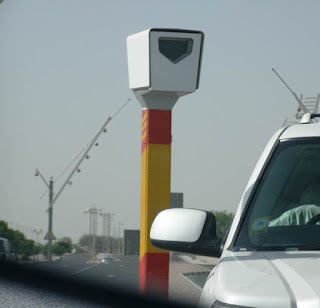 young local drivers often ignore red lights at intersections missing these flashing beacons of order
By the time I arrived, Bob had been driving ticket and accident free in Doha for three months.  My five minute lesson:
And - license plates with fewer than six numbers are local, the fewer numbers, the closer that driver is to, ahem, The Top.  Stay Away From That Car.  (The smallest set of numbers we've seen is TWO; the car was parked illegally at a mall.)
Truth, driving in Doha is like driving anywhere else - while balancing at the top of a roller coaster.  All you gotta do is (discern then) follow the rules, stay away from transgressors (and those sporting short license plate numbers).
My technic for driving in Doha is easier to remember:  Breathe, Smile... 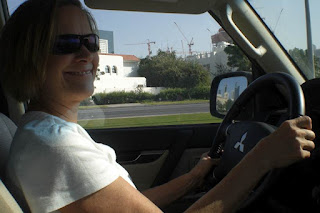 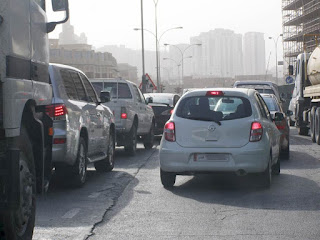 Posted by Lucinda H. Kennaley at 1:06 AM

How could I have missed this last September???!! Only had my IPAD in Greece -- but it's even better when I know you're in the middle of all of this traffic!! Great post!!!