Fanar offered non-Muslim expats three opportunities this week to share a "traditional" iftar experience (breaking the day's Ramadan fast by eating together) in a program titled, "Come Fast With Us."  Fasting before the meal was not required.  To enhance the experience, I decided to fast anyway. 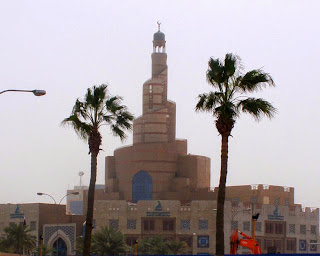 Fanar: Qatar Islamic Cultural Center
Every year Muslims all over the world abstain from food and drink (this includes water) for the 30 days of Ramadan, from dawn (about 3:30am) to sundown (about 6:30pm).  All Muslims…excepting the insane or children under the age of 10 years.  Those who are sick, travelling, pregnant, nursing or menstruating are not expected to fast, but must reschedule the missed experience for a later date:  "a day for a day."  People who are old or chronically ill feed a needy person in lieu of fasting.
Ramadan occurs during the month of the Islamic ("Hijri") calendar when it is believed that the Holy Quran was revealed to the Prophet Muhammad (PBUH: this means "peace be upon him" and is the English equivalent of what follows the Prophet's - PBUH - name or title).  Each year the date Ramadan begins changes slightly as the rhythm of the Islamic calendar is affected by the moon.
Fasting is one of the Five Pillars of Islam.  It is a gift to God, opportunity for prayer, introspection, self-reflection, empathy. If you're Muslim, fasting earns you reward in the afterlife.
The Five Pillars of Islam:
1.  Faith:  the Shahada
2.  Prayer
3.  Zakat:  charitable giving
4.  Fasting
5.  Pilgrimage: the Hajj
Islamicity.com
If you're non-Muslim, expect a body cleansing, soul freeing, emotion enhancing experience. Do not expect to earn points toward the (Islamic) Heaven.
How to begin fasting:

1) rise before dawn (unless you're the mom, sister, aunt or other able bodied female, in which case you get up even earlier to cook…or if you're like many young Muslims who stayed up all night feasting/playing, you would make your way home to gather with the fam and eat some more before the new fast begins).
2) enjoy a pre-fast meal called "Suhoor."  The meal may consist of anything you like except alcohol or pork, which are forbidden in Islam.
3) express your intention to fast: "I intend to fast today."
4) stop eating and drinking.
5) pray.
At dawn, approximately an hour and a half before sunrise, the muezzin chants the first Adhan, called "Fajr."  All eating and drinking ceases about 5 minutes before the call.
At 3:15am I drank a bottle of water, said a prayer.  Catholics, like Muslims, have standardized prayers - the Lord's Prayer, Hail Mary, Angel of God, etc.  But when I talk to God (especially at 3am) it's usually in the Baptist way, ie, a variation of this:
Dear God, Bless my babies, Chris, Katie and Kimberly, Krissy and Killian.  Bring them happiness, peace, joy, love.  Send angels to guide their decisions, guard their hearts and keep them safe.  Thank you for Amazing Bob, his wisdom, kindness and all the sacrifices he makes for our family.  Thank you for Mom and Dad and Kitty and Kay and Charles and Bernie and  (insert your name here).  Help us to love one other.  Let me make a difference in someone's life today.  Amen.
I won't detail the rigors of my first Islamic fast.  Let's just say:  it was difficult.
I read.  I napped.  I (tried to) write.  I watched "Dora the Explorer" in Arabic and baked brownies for the next day's Secret Ramadan Lunch.
The no-food part wasn't that big a deal for me.  The no-liquid part, however, was a moment-to-moment challenge.
(In the interest of full disclosure:  because of the extreme heat, I'd made plans to stay inside most of the day, which is not usual for me.  While temps soared to a scalding 105F, it was not humid and there was a rare, God-gifted breeze, so I was able to sit on the balcony.  I did not sleep the day away.  But I cannot claim to have done my "regular" thing while fasting.)
By mid-afternoon, I couldn't type straight anymore and my eyes had stopped working.  I was exhausted, dull, cranky and sad.  But I was no longer hungry or thirsty.  (Kind of like when you stop feeling cold just before you freeze to death?)
With the end of my first fast in sight, I joined a group of other non-Muslims at Fanar as Brother Domenic, a bearded Irish convert with Leprechaun-pink cheeks, twinkling eyes and an impish grin outlined Islam, explained Ramadan and detailed how fasting works.
Brother Domenic:  "When is orange juice like alcohol?" Answer: "During daytime hours in Ramadan."
The group separated by gender.  In the ladies' area, we sat on the floor and enjoyed the communion of (vacuum packed) dates and (bottled) water and a traditional rice, lamb and salad feast.  We learned more about Islam from an eloquent, fun and funny niqab-wearing convert from Virginia, USA, who speaks fluent Egyptian and Gulf dialects - and was the only participating Arabic speaker.  (To my knowledge there were no Qataris - or Arabs - present.)  Each guest received a tee shirt and a book about Ramadan. 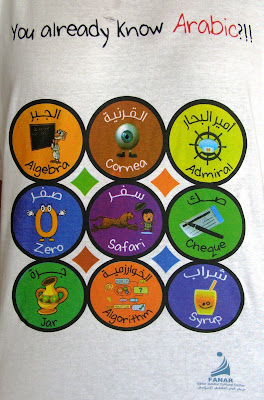 tee shirt
Later, I ate a bowl of popcorn, nibbled a few cookies and fell asleep watching "Conan" (the talk show host , not the Barbarian).  I didn't feel the need to stay up all night eating, but then…I wasn't going to be fasting the next day (or the next or the next or the…) either.
Garangao 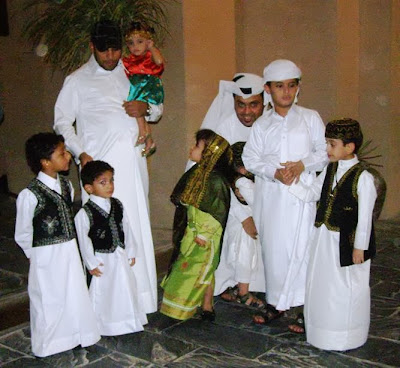 photo ops galore
(camera trouble: please forgive pic quality!)
Once upon a time, the full moon on 14 Ramadan (the day that marks the celebration's half way point) meant children dressed in traditional costumes going door to door to collect treats and money from family and friends.  Today, tribes are spread throughout the city and unrelated multi-ethnic strangers hunker next door.  Instead of the traditional door to door-ing, parents and children gather at specified locations and, in the same way that America's Halloween has become "Trunk or Treat," children move from station to station showing off costumes in exchange for bags of candies and nuts.  (Click here to read more about Garangao.) 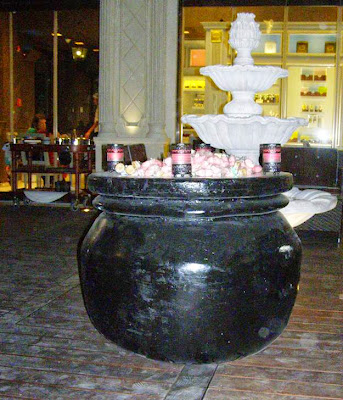 "Cauldron" of goodies outside a restaurant reinforces Halloween analogy
(same disclaimer about photo quality)
Garangao-ween (without the devils, demons, zombies and fairies)?
Garangao is a Gulf tradition.
Unlawful Sex
In March, 2013, a 24-year old Norwegian businesswoman from Doha is raped by a coworker while at a business meeting in Dubai.  She reports the assault and is charged with having unlawful sex, making a false statement and illegal consumption of alcohol.  She is sentenced to 16 months in prison.
Her (alleged) assailant, who is married, is convicted of public intoxication and having sex outside of marriage.  He receives 13 months in prison.
This week, following a world-wide outcry against the treatment and sentencing of the victim, all charges against the young woman are dropped.  She is pardoned by royal decree.
Since there is no longer a case, all charges against the (alleged) rapist are also dropped.
"While Dubai has a reputation as a cosmopolitan city that boasts Western influences, where visitors can drink at bars and restaurants and unmarried couples can share hotel rooms, the country adheres to Islamic laws and traditions.
Having sex outside of marriage and public consumption of alcohol are both violations of the law in the United Arab Emirates."
cnn.com
The young woman and her (alleged) attacker are both fired from their jobs in Doha for "drinking alcohol at a staff conference that resulted in trouble with the police." cnn.com
Posted by Lucinda H. Kennaley at 2:58 AM

Exhausting. Well written--which contributes to the exhaustion. When does Ramadan end this year?

I believe the three days of Eid are August 8-9-10 this year. The country essentially takes off work to celebrate. :)

On my calendar. When we were going to Egypt every year, I always marked Ramadan on my calendar from year to year, just so I could/would schedule around it.

I thought maybe there'd be more to see/participate in...a lot of people leave the country for the month. Those who stick around are active in the wee hours (whole families wandering the boardwalk below our window at 2am, for example)...streets deserted during the day.

So, are you planning on doing another one day fast next year? And what were the "spiritual" (or otherwise) experiences from your one day fast this year?
Dad

Hmmm...(if we're here next year), perhaps I'll do it again. Realizations include: I drink a lot (of coffee/water). I'm not good at "staying in"(weather be...darned). And (not really a "realization" but thereyago) there's nothing more important than family.:)