Ramadan: And Then Comes the Eating

Iftar is the meal served at sunset during Ramadan, as Muslims break the daily fast with dates and either water or a yogurt drink…very much a social event, involving family and community members…
http://islam.about.com
Iftar: it's like Thanksgiving dinner, all night, every night for 30 days straight. 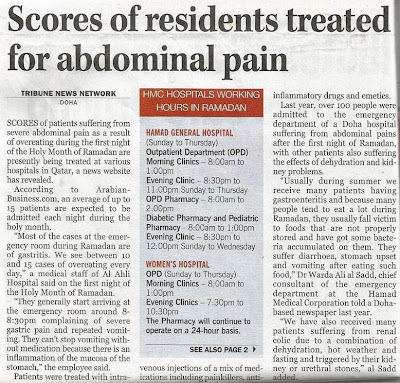 
A traditional Middle Eastern meal consists of one big plate of food and a mat on the floor.  In Egypt, we scooped communal fare with bread.  In Qatar, family members dine from the same tray, feasting out of the nearest spot using the thumb and first two fingers of the right hand.
During Ramadan in Qatar, restaurants and hotels offer nightly special deals for a bounteous iftar feast involving multiple courses.  Businesses sponsor "iftar tents" where Muslims commune for free eats.  In modern and becoming-modern Middle Eastern countries like Qatar, families also eat out - at Chili's, The Outback, Bennigans. 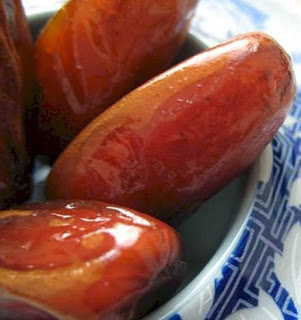 dates
But first, after as many as 16 hours without food or drink, the faithful break their fast with dates and sips of water.  For some, the custom is a sort of religious communion.
Communion:
the sharing or exchanging of intimate thoughts and feelings, especially on a mental or spiritual level; shared participation in a mental or spiritual experience
http://oxforddictionaries.com
In the Protestant church where I grew up, monthly Communion was celebrated after a hearty greeting that involved hand shaking, smiling, laughter and words like "Welcome! How are you! Glad to see you!"  Music played.  A silver tray pocked with holes that fit the (shaped-like-a-shot-glass-but-smaller) crystal-like cups was passed from person to person.  When each of the faithful held a glass of the blood-red drink (ie, grape juice: "as the body and the blood"), the minister said a few words and congregants consumed the liquid, all at once, together.
Afterwards: potluck supper.
In the Catholic church where Bob and I raised our children, Communion was celebrated after a structured greeting that included a hand shake, nod and the words, "Peace be with you."  Specially trained ushers ("Eucharistic ministers") received a single goblet of blood-red liquid (ie, wine: "is the body and the blood") and waited at the front of the sanctuary.  As music played, congregants quietly exited to the aisle, one row at a time, before returning in orderly fashion to the same seat previously vacated.
Then: McDonald's drive thru and kids' baseball games.
In the unmarked (by law) Catholic church Bob and I attend in Doha, multi-national communicants greet one another by placing palms together at chest height and bending at the waist.  There are approximately 200 masses a week to choose from (I might be exaggerating a little) offered in an ever evolving variety of languages, which currently include Tagalog, Malayalam, Urdu, French, Spanish, Arabic, English and more. 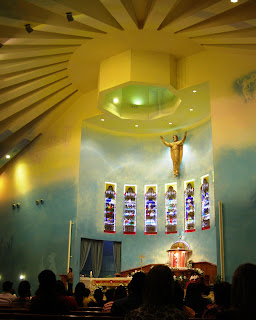 As music plays, white robed male and female ushers position themselves throughout the sanctuary.  And then, tsunami:  all at once and in no particular order, parishioners rush forward.  From the sides, middle, front, back.  Climbing over people, purses, strollers.  Stepping around, hurtling past, creating lines…of a sort.
Sometimes it's hard to tell who's moving forward and who's moving back.  Sometimes, after making one's way through the crowd it's hard to relocate one's originally vacated pew.  Sometimes it's hard to relocate one another.
Then, Bob and Cindi time: popcorn and Conan O'Brien, Jay Leno or an edited-for-Doha movie.
At the end of a day's fast during Ramadan, Muslims greet one another with kisses and exclamations.  The call to prayer is rhythmic, peaceful and calming.  There is the nibbling of dates and the sipping of water.  There is (the separation of the genders and) community prayer.

During Ramadan, Doha's Fuddruckers
is open from 6:30pm-1:30am
And then comes the eating.
Posted by Lucinda H. Kennaley at 1:36 AM

Interesting. All the different religious beliefs--different but the same.

Are the similarities between these religious communities due to your interpretation or would they be obvious to the true believers in each community?
Dad

Hmmm...while I think your question is best answered by the "true believers in each community" - I would say that most any (Western religious type some)one attending the Doha church would notice the different style of queuing that occurs during communion. :)

Six o'clock Friday a.m. there --I thought I might see your Friday post--even tho' it's still Thursday here. Look forward to waking up to it in the a.m. I enjoyed reading about Ramadan again in any case and look forward to tomorrow's submission.