You're Not the Boss of Me (except in Doha)!

"Your husband needs to sign this document giving you permission to work."
I laughed and returned the paper.  "Right. Funny."
"No, really," she said. She held the page so I could read it. "Isn't he your sponsor?"
Article 18:
Each Expatriate granted an entry visa to the State of Qatar shall have a sponsor…
I required Bob's written permission to work - or drive - in Doha. 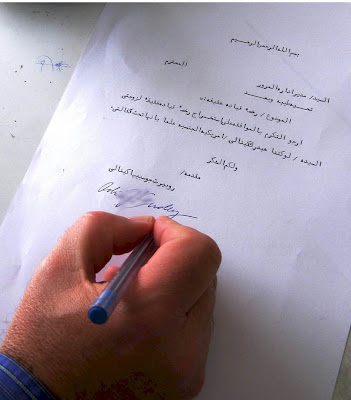 (photo edited)
In the name of God the Merciful
To the esteemed Director of Traffic, Greetings.
Regarding Placement of light driver's license: I agree that my wife of American Nationality may have a driver's license under my sponsorship.
Thank you and to the presenter,
Robert J. Kennaley
Hanging out in Doha isn't the same as planning a Roman holiday, taking a weekend in Athens or jetting to Dubai for a round of golf. To visit, live and/or work in Qatar, you need a reason, a place to stay and an official someone to vouch for you.
The process is either complex or…really complex…depending upon where you're from.  Citizens of 33 specific nations may purchase visas on arrival while those from UAE, GCC countries, and Gulf and Arab States enter without visas. All other nationalities must apply months in advance.
Some nationalities are denied entry. For example, recently there were visa bans on women from Philippines - and anyone from Lebanon. Some foreign workers must leave the country at 60 years old, no matter how long they've lived and worked in Qatar. And (while I haven't been able to verify it) word is non-Qataris over 70 years old are not allowed into the country at all.
To extend visits beyond the initial 30 days, it is necessary to leave and return (so as to begin a new 30 day period) or apply for residency - a process that involves x-rays, blood work, medical evaluation, fingerprints, photographs, official and authenticated raised-seal college and marriage certificates - and stacks of paper. But first and foremost:
You must have a sponsor.
Article 19:
The residence sponsor, whether a natural or legal person, shall satisfy the following requirements:
1.  to be a Qatari national or an Expatriate resident under the law, and if the sponsor is a legal person, it must have a main office located within the State of Qatar or operate a branch therein;
2.  to be qualified to fulfill the responsibilities consequent on sponsorship imposed hereby, and to employ and supervise the Expatriate if he enters the country as an employee.
Here's what I know about sponsorship in Qatar:
A sponsor is either the expatriate's employer or spouse.  In 2010, expatriate women were granted limited permission to sponsor husbands.  The current law states only that the "head of household" may sponsor spouse and/or children and that an employed woman may "bring her husband" under certain conditions:
Article 21:
Responsibility for sponsorship of the Expatriate shall be determined as follows:
1.  The Expatriate shall only be sponsored by the employer;
2.  The head of the family shall be the sponsor of family members resident with him in the State;
3.  A visitor shall be sponsored by his host resident in the State of Qatar;
4.  A woman shall be sponsored by the person supporting her with whom she has come to reside, even if she subsequently takes up employment, and a woman who enters the State of Qatar for employment purposes may bring her husband with her in accordance with the requirements determined by ministerial resolution; and
5.  A Qatari woman married to a non-Qatari may, subject to the approval of the competent authority, introduce her husband and children under her own personal sponsorship.
Since sponsors may be liable for an individual's debts and other bad behavior, written permission from one's sponsor is necessary for everything from opening a bank account to buying a car or taking a vacation.  Some sponsors retain employees' passports and travel documents.
To change jobs, individuals must acquire a No Objection Certificate (NOC) from the current employer/sponsor.  Employees who end jobs and leave the country are not officially allowed to return to Qatar for two years.
There are exceptions - usually involving Wasta:  the Middle Eastern form of cutting-in-line, bending-the-rules, lets-make-a-deal.
But back to the beginning:  my job, that paper and Bob's permission.
How does a grown up, independent American woman who's lived, worked and traveled alone, bought and sold stuff, managed a household, homeschooled three kids, made decisions, handled adversity, won and lost on her own merit…for years and years and years…seek permission from her husband to work?
Answer:
Common objectives, shared goals, mutual understanding, doing what it takes, commitment, love.  And then:
"Sign here, please." 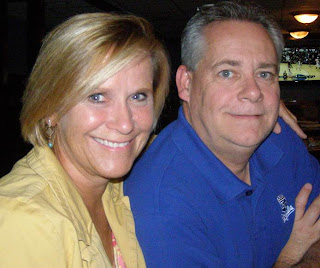 Happy Together
Resources:
Qatar Sponsorship Law
Posted by Lucinda H. Kennaley at 9:02 AM

Aha! Why did you not notify me that you had published another blog?

I look forward to receiving your notifications and reading your blogs. By the way it is not much different in the U.S. Foreigners need a sponsor.
Dad