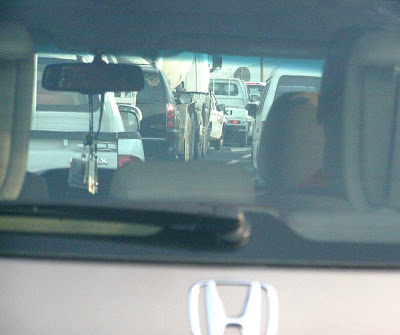 through the rear window of the car in front of me - where's the light?
…where I die while parked at a red light.  Cars stream past in long lines, honking horns, flashing brights, cutting in, out and around my stalled vehicle for years and years until the SUV disintegrates into a rusted heap, mixes with my dry bones and rides a sandstorm to far, far away.
Traffic is ever worse in Doha. (Click here to see what driving in Doha looks like.)
"Cindi, you must ask your husband, WHEN will Mshiereb project finish?" say the Ladies at Fanar, only half joking.
An important stretch of road sealed for the project means increased traffic around the Cultural Center, tie-ups on the Corniche, waiting through three (or more) green-back-to-red lights.  Long, slow rides to work, students late for class, fender-benders -- and worse. 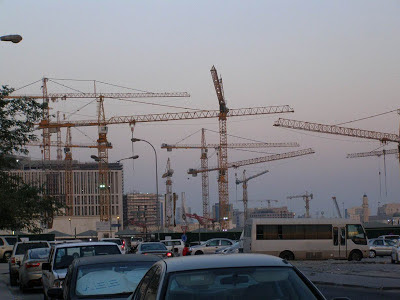 Mshiereb at dusk - cranes over giant hole
While it's true this one massive project slows movement around town…it's not the only monster on the block.
All over the city, there is construction.  Streets dotted with cones, lined with concrete dividers, interrupted by big-bodied cranes, loaders, lifters, scrapers, shovelers. Trucks brimming with concrete and steel rumble alongside buses full of workers.  Slow moving Toyotas stuffed with impossibly-awkward, intently worrisome trundles of "rebar" and heavy flatbeds crammed with pyramids of brick and stone compete for road space with moms in minivans, businessmen in BMWs and Suburbans full of bouncing children (seatbelts not required), while ladies in niqab (ie, only eyes visible) wearing sunglasses drive Explorers and McDonalds deliverymen dart about on motorcycles.
In Doha, traffic surges just one way with a green light. This means only one quadrant of an intersection moves at a time.  A light may remain green up to 5-10 minutes - a lifetime if you drank a bottle of water half an hour ago but nowhere near long enough if you're 200 cars from the front of a blocked intersection.
Entering and exiting a roundabout is like dancing into a game of double dutch - maneuvering into the space between two moving ropes without breaking rhythm and crashing (a street game when I was a kid, now a bonafide sport):
There are no shortcuts either - traffic blocks alleyways and back roads just as it clogs the city's major arteries.  Most of the time you're better off putting the car into park, chain-chewin'-you-some-gum and waiting for the dance to begin:
Jump Rope Rhyme for a Doha Roundabout
Roundabout Roundabout let me in
Goin' to The Pearl to drink some gin
If I should die before the light:
passing is prohibited on the right.
Posted by Lucinda H. Kennaley at 12:03 AM