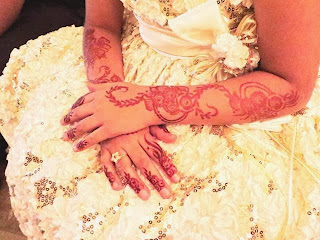 a sweet little girl, henna, a shiny, sequined dress
"The Arab dance is like walking," said my new friend, when there was a break in the music.  She raised an arm shoulder high, wrist loose, fingers down, lifted a foot, took a step.  "You see? Easy."
In the middle of the room, ladies danced on a raised platform.  Like a model's runway it spanned nearly the length of the space, meeting the stage in the middle to form a "T."  On the stage high above the platform was a long white divan covered in luxurious white, gold and red pillows, flanked by columns and surrounded by roses.  Later, the bride would sit here.  Much later, the groom would join her.
Hips rolled, shoulders dipped, arms moved like ribbons on boneless bodies as ladies slowly circled the runway.  Thrumming, drumming, sinuous, sensual Middle Eastern style music resounded through speakers from the live (male) band tucked into a hidden space behind the stage.
Maybe walking was the first dancing lesson, but the rest of it?  Definitely.  Not.  Easy. 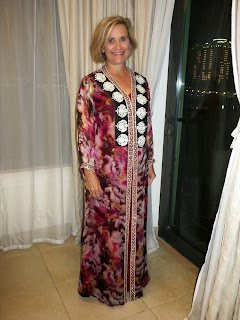 Some women wear abaya and sheyla to marriage events, but
traditionally each celebration is an opportunity to see and be seen
guests dress up hair, makeup, clothing
photo above offers a Very Conservative Sample of Qatari wedding attire
The hall was wide, bright and surrounded by a flowing white curtain to protect ladies' privacy.  Crystal chandeliers hung from a sky high ceiling.  Attendants in brilliant white and gold served sweets on luminous gilded trays.  Round tables decorated in white and yellow featured tall candles and vibrant bouquets of rich red roses.
Lines of velvet covered chairs flanked the runway.  Grandmothers, mothers, aunts, matchmakers and other relatives occupied these seats.  To enjoy the dancing - but also to consider the young, unmarried guests as prospective husbands for sons, nephews, brothers.  Velvet seat relatives ascended the runway with stacks of QR notes which they shuffled into the air above a dancer's head.  Money poured like rain over the platform.
Special servers collected the notes in brown bags.  The money would go to the band. 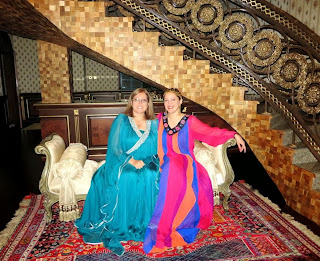 my beautiful friends, Nancy and Ania
world travelling, multi-lingual mother-daughter pair
masha allah!
Here's what I've learned about Qatari weddings (from presentations at Fanar and personal experience):
There is no celibacy in Islam
Prophet Mohammed (PBUH)
Choosing a Partner
Most Qatari marriages today - nearly 100% - are arranged, preferably within the same tribe.  This is to keep money and property in-house, but also to protect the bride.  It's easier to know a man's true character when he's already a member of the same family.  Traditionally young couples spend the first week after the wedding with the bride's mother before moving into a space in the groom's family home.  Nowadays many young couples eventually move into their own, separate, house.
As Qatari life adjusts to meet demands of a changing world, more young men and women meet and choose prospective partners themselves - through work, school, friendships.  The arrangement process, however, remains the same - mothers, aunts and matchmakers consult, father's/guardian's approval is obtained.  The couple talk on the phone, email, meet (always with family members present) and the young man is allowed to see the young woman uncovered in a chaperoned setting.  If everyone agrees - including the young couple, each of whom may decline - the contract is signed.
The Contract
This is when marriage conditions are spelled out - like the bride's desire to finish school, work after marriage or be the only wife.  Potential disagreements are aired, discussed, agreed upon - like a pre-marriage counselling session with legal implications.
The mahr - a kind of dowry - is offered by the groom's family.  The money is a gift to the bride payable before the wedding - and usually (in Qatari society) spent on the wedding.
After the contract is signed, the man and woman are officially married.  Consummation of the union does not occur until after the actual ceremony.  A change of heart after the contract is signed requires a divorce.
Engagement
The engagement may last days, months or even (in the case of children promised to one another, for example) years.  There is an announcement party where the couple's intention is declared and sometimes a celebration called walimah, a banquet specifically for the families to become acquainted.
Weddings
There are two weddings: one for the women and one for the men.  Traditionally, the men's party takes place in tents outside of town and involves sword dancing, nose tapping, food and good hospitality.  Generally, it is an open event and invitation is by word of mouth.  To learn more about Qatari weddings from a man's perspective, read this wonderful 5-part account by Qatari blogger Osama Alassiry.
The ladies' wedding begins with the engagement party and includes a henna night as well as the actual wedding.  All ladies' parties are private events, usually held in a closed hotel space.  Printed invitations are issued and phones and cameras are taken at the door.
Other Stuff
Qataris are known for their hospitality and a wedding celebration is the ultimate opportunity to honor one another with food, nonalcoholic beverages, sweets, perfume and other gifts.  The cost of a Qatari wedding today may exceed 1 million Qatari Riyal.  Both the bride's and groom's families contribute to expenses. 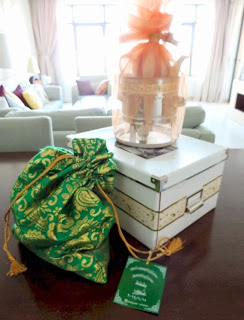 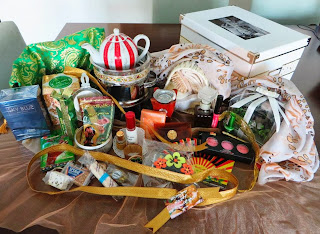 inside gift bags: harakat!
(Qatari dialect for wow!)
Sometime after 10pm, attendants pulled back a curtain and the bride appeared under a white arch.  She wore a modern, glittering white gown with a wide skirt and train.  Gems in her dress reflected the silver jewels in her hair, ears and around her neck.
So lovely:  masha allah.
Sweet bukhoor wafted about the room with as the bride made slow progress toward the steps leading to the runway.  Lit candles glowed along the platform, marked the stage, shimmered at each table.
There was hugging and kissing and whirling clouds of money.  Professional photographers took photos and video.  Sweets were offered on golden trays by gold attired servers.  A female singer performed inside the hall - and money filled the air - 1, 5, 10QR notes and American bills too.
At an unseen signal sometime after 11pm, ladies donned abayas and sheylas.  Arch curtains opened and the groom appeared in dress robes and flanked by his father, other male relatives and three young boys with swords.  The boys performed a sword dance as the group moved slowly up the stairs, across the runway and toward the stage where the bride waited, hidden now behind a screen.
More hugging and kissing, photos, video and a hurricane of QR notes.  The groom's male relatives and friends (those not allowed to see the bride) left the room.  The screen was removed.  The bride stood.  The groom moved to stand beside her and his relatives circled the couple.  There was hugging and kissing, photos, video and more raining money.
The groom joined his bride on the divan.  They held hands as money swirled around them.
A fantastic buffet dinner was served after midnight. 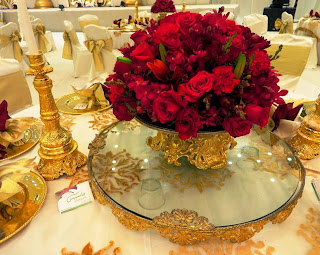 
Around 1am, servers returned with bukhoor and bottles of sweet perfume, signaling time for the bride and groom to depart.  Together the young couple stood, walked slowly hand in hand across the stage, down the runway, through the curtain and disappeared under the arch.
We took a turn on the runway after the party was over, walk-dancing from one end to the other, waving arms and swinging hips.
No one tossed money.  Masha allah!
Posted by Lucinda H. Kennaley at 4:36 AM

Cindi,
That was fascinating and marvelous. Thanks for sharing your wonderful adventure!!
Sheri

I agree with Sheri. Thank you for sharing.... I felt like I was there, and have a new understanding of the customs of Qatar.

Wow, beautiful! What a great experience!

That certainly seems more elaborate than American weddings--and more expensive. Are all Qatari weddings as elaborate and expensive?

how fun! You look beautiful!
Love,Katie

@Cindi thanks for the link... I'm still going to write about "after the night"...