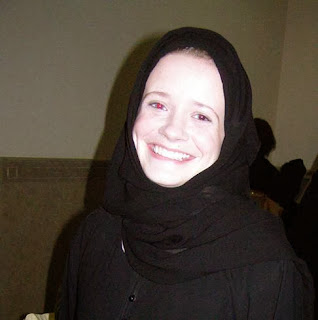 Kimber studies culture and language
Doha, 2012
"…The meaning of al-Salam Alaikum is informing the person who is greeted that he is in peace and safety from all kinds of mischief from the side of the greeting person…"
Islamweb
In My America, the cashier at Target wears a head scarf.  "Salaam Alaykum," I say.
She peeks at me out of the corner of one eye, whispers, "Wo alaykum..."
"…Imam Ibn Majah…'If they greet you saying al-Salam Alaikum (peace be upon you) reply them with Wa Alaikum (and upon you too)'…"
Islamweb
"Do you know Arabic?"  I ask, in English.
She's from Togo where French is the national language and English is widely spoken.

She smiles.  "I'm learning."
"That's great!" I reply, in Arabic.  "I'm learning too.  Please, will you speak with me?"
She laughs and says in English, "No, stop.  I don't know this."
"But don't you read the Koran?  I'm learning the Arabic of the Koran."
"My husband does.  He's studying Engineering here.  He tries to get me to read the Koran."  She shakes her head.  "I want to learn before we return to Saudi Arabia."
"If you speak Arabic with me we can both practice." 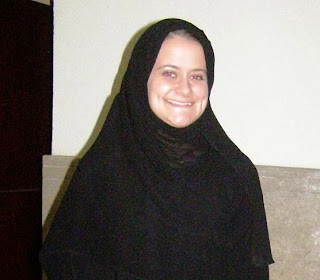 Katie
Doha, 2012
The next time I see her, she's wearing a dark blue snow cap over a black headband.  "My husband was asleep when I left this morning."  She shrugs, adjusts the cap.  "It's fine as long as my hair is covered."
She speaks to me only in English.
The next - and last  - time I see her, she's wearing a beautiful black and white sheyla.  She goes to break as I approach her line; she does not return my smile.
"…the Prophet said: "Do not greet the Jews and the Christians before they greet you and when you meet any one of them on the roads force him to go to the narrowest part of it…"
Islamweb 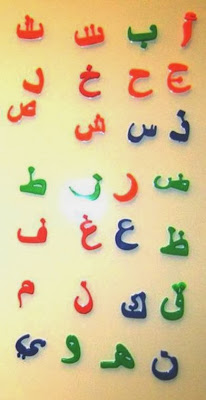 In Doha, I'm often asked why I want to learn Arabic.  "Because I live here!" I reply.  Perhaps it's also true that since I studied Arabic in my youth I'm drawn to the inflections, intonations, highs, lows - the language's uniquely musical qualities.  I like the way one word or phrase can mean many different things.  That God is part of everyday speech, whether greeting a person, introducing an idea or baking a cake.  How there are so many responses to "I hope you're well" it can take 20 minutes to get past "hello."
Sometimes I wonder if Arabic is a language or a religion.
"…'al-Salam' (peace, safety) is a Name, Attribute, and Act of Allah, so pronouncing this word is a supplication of Allah. Therefore, this great word should be protected from those who do not believe in it but they are enemies of Al-salam (a name of Allah). Thus when the Prophet wrote letters to the kings of Kuffars he wrote in the beginning 'Peace be upon those who follow the Guidance'; he did not write Kuffars the expression 'Salaam alaikum.'"
Islamweb
In America, as in Doha, I study alone at my kitchen table or with other non-native speakers.  I read children's books, watch children's videos, listen to Middle Eastern music and write emails, stories and poems.
It's not enough.
"…The ideal way to learn a foreign language is by conversing with native speakers…"
Instructables.com
Yesterday I mail a package at the post office.  A man passes me carrying a baby.  Behind him steps a woman in abaya and sheyla.  She glances at me.
"Salaam alaykum," I say.
She smiles, surprise lighting her face.  "Wo alaykum salaam."
"A smile is a gift and counts as a form of charity."
- Qatari teacher at Fanar, the Islamic Cultural Center, Doha, Qatar 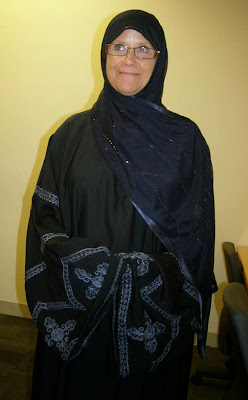 How to Speak Arabic
Lesson 1?
Posted by Lucinda H. Kennaley at 6:55 AM

Reading this particular blog reminds me how different the cultures are--American and Muslim. Both cultures are on different trajectories causing one to wonder if there can ever be any middle ground between them or only wary respectful toleration. What do you think?