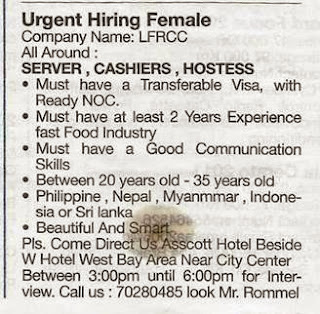 I drive my car slowly between the line of humming buses parked along both sides of the street.  I take extra care this sunny afternoon not because the road is narrow but because of the men running in front, behind and alongside my (um, Bob's) black xterra.  The men wear boots, heavy blue work pants, yellow vests.  Masks in place over mouth and nose in some cases and in others pulled back to let the hot, dusty air in.  My window is closed to it, but I know there is odor here, too, salty, thick, permeating.  Black, oily, hair bounces in congealed clumps over faces darkened by 12 hours laboring under the broiling Middle Eastern sun.
Nearly all the men are from India or Nepal - I knew this not out of prejudicial instinct but because I've come to recognize the physical differences in people from various parts of the world:  stature, shape of the nose and jaw, color and texture of hair and skin…and also because only Indian and Nepalese men are hired for certain jobs in Doha. 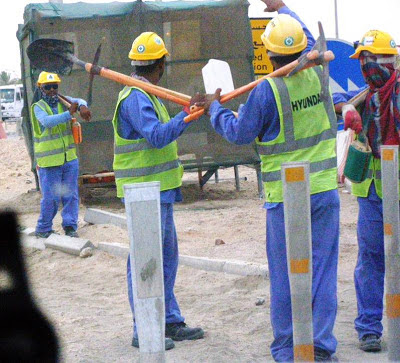 Before you begin name calling, realize it works both ways.  Yesterday, the Arab cashier at the Carrefour counted my change back to me in German.  If I keep my mouth closed, people will sometimes speak to me in French or Spanish, and I was once asked if I was Lebanese…but nobody ever mistakes me for Filipino or Pakistani.  When I speak Arabic to a Middle Easterner, sometimes they don't understand me right away because my hair, face, skin and the way I move flips the switch in their multi-lingual brains to English.
On the sand and rock beside the curb where the buses are parked, grown men sit, legs crossed, shoulders hunched.  Some hold hands - a non-sexual, cultural thing - others lean tired heads on another man's shoulder.
My swift moving escorts don't give me a moment's concern as they hurry toward the circle of roosting men:  first to board the bus gets to sit for the long drive in traffic to the worker's camp outside the city.
Although it's smaller than Connecticut (Qatar: 4,416 sq. mi/Connecticut: 5,544 sq. mi.), Qatar employs more than a million people from all over the world in a wide variety of occupations.  There is no minimum wage, opportunity for advancement (by law, a Qatari must own 51% of every business here), non-discrimination policy, Fair Housing Act, Title IX.
There may (or may not, depending upon your political party) be recession in America, overpopulation in India, hunger in Pakistan and Nepal, homelessness, under- and un-employment throughout the world…but in Qatar there is work.
Lots and lots of work.
If…you're the right sex, nationality, age, speak the necessary language, and are willing to accept the position's wage, work week and living conditions, in Qatar you might be a:  nanny, maid, housekeeper, sweeper, scooper, driver, railing duster, stander, leaner, plumber, electrician, carpenter, builder, hammerer, follow the emir's horse guard cleaner-upper. 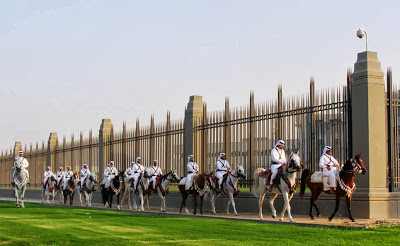 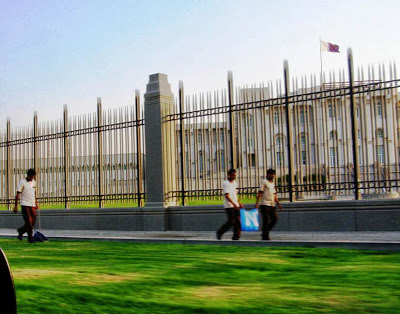 then comes this
In this category of employment, participation in local activities is limited, wage is low, exit visas are guarded and one is often separated from family for years at a time.
If…you're the right sex, nationality, age, speak the necessary language, and are willing to accept the position's wage, work week and living conditions, AND have the education and experience to procure the proper visa, in Qatar you might be a:  doctor, nurse, architect, engineer, administrator, contractor, teacher, librarian, broadcaster, journalist.
This category of employment means living allowances, perks like cars, luxury apartments, cell phone packages, funded trips, tuition reimbursement, free stuff. 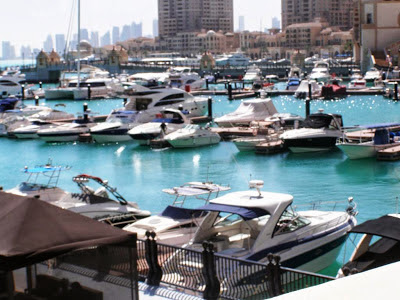 It's "rare to doesn't happen" to see even the youngest, hungriest, least experienced (American, British, Australian…) scooping, shoveling, hammering, herding, stand-here-and-wave-this-flag-ing.
But it's not uncommon at all for educated, experienced individuals of (every nationality) to earn a living in Qatar as architects, engineers, nurses, doctors, physical therapists, and more.
Because even in a place where housing perks - and chocolate - are distributed based upon where you're from…education matters. 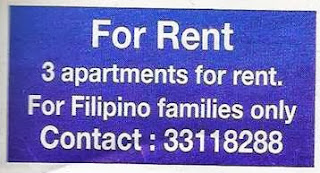 Wealth in England isn't the same as wealth in Saudi Arabia.  Poverty in America does not equal poverty in Nepal.  Children go hungry, men are unemployed, women disrespected…everywhere.  To some, life in a laborer's camp is unfathomable.  To others, it means sleeping on a mattress instead of inside a box, money sent home, clean clothes, a hot meal…and dignity.
Life is not "fair" and opportunity is relative.
Then again, it seems to me that…if you're lucky enough to be born into a place of possibility and promotion, surrounded by family and friends who love and support you…you should follow your dreams!  But earn that piece of paper that validates your knowledge and experience too.
Defaulting to a lifetime of minimum wage jobs, unemployment checks and daytime tv when a smorgasbord of opportunities was bestowed upon you simply because you were born is just another way of…chasing the bus.
Posted by Lucinda H. Kennaley at 3:28 AM

Very informative! Do you know if the Qatari Government advertizes for workers in Nepal, India, the Philippines, etc.? That is to say that they publish want ads in local newspapers in those countries?
Dad

Dealing with a complicated, maybe difficult, subject extremely well. And well written, too!

I don't know if there are ads placed in newspapers in other countries-an interesting question! Wages are negotiated between countries for some jobs, for example only certain nationalities may be maids or nannies and workers are paid according to the agreement between the two governments. Thanks for the question!