My Life in America - the People 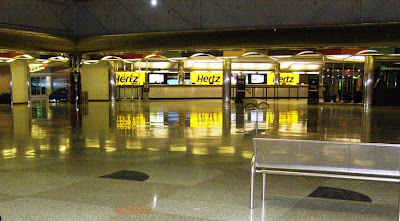 what it looks like to rent a car at midnight in Kansas City
Our agent is twenty-something young.  Black. Male. Beard. Business casual slacks, white polo.  Dark jacket, company logo. A smile.
Howyadoin?  His accent is distinctly American:  hard r's, "yeah," "uh-huh," t is d, s is z, words slid together, vowels buttered with y.
"Where you travelling from?" he says.
"kuh-TAR," says Bob, using the American pronunciation.
The agent smiles and repeats the country's name:  "قطر"
I respond in Arabic and he laughs. "Atakellam shwaya bass." I only speak a little.
He is Muslim. Attended Madrasa - where he came to understand the Arabic of the Koran. Now he's learning to read and write the language too.   He draws his name in fat, curling Arabic letters - and is proud when I can read it.
يوسف
Yusuf attended Northtown High School.  Graduated from a local college.  Lives with family, which includes two brothers.  He grew up in this city.  But originally, he says, "I'm from Somalia."
He tells us about his trip to Saudi Arabia, his Hajj.  About his flight home sitting beside an American Jew returning from her own pilgrimage to Jerusalem.  How they share experiences - and God - at 30,000 feet.  Male/female, white/black, Arab/Jew.
Two completely different people with one thing in common: both are American. 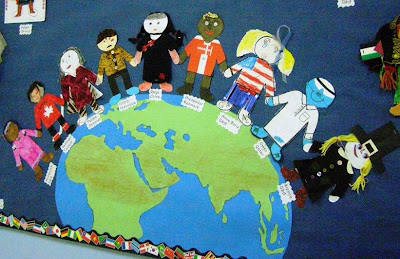 display from a bulletin board at The American School of Doha
She tells him about the Wailing Wall.  He shares why Muslims circle the Kaaba seven times.
No dissention, no argument.  "It was profound," he says.
Sure Americans don't always get along - any more than siblings like the same music or wear the same fashions.  We are, however, conditioned toward acceptance in a thousand different ways: affirmative action, laws against discrimination, kids who give Valentines to everyone in class, the National Geographic channel.

We're as different as apples and trees - connected by tangled branches of concession.
American is Muslim, Jew, Catholic, Lutheran, Buddhist.  Black, white, olive, brown. Married, single, partners.  Gay, straight, "other." Conservative, liberal, rich, poor, in-between.  Jeans and tee shirt, suit and tie, hijab and abaya.  Outspoken, reserved, prejudiced, accepting.  We are The People of Walmart, The Academy Awards, Tom Hanks (because everybody loves Tom Hanks) and…Westboro Baptist Church ('nuff said).
Cashiers, business owners, homemakers, truck drivers, rodeo riders, students, writers, architects, engineers.
Unique…even to one other.
In fact, you could say that the only thing that's the same about Americans is: we are all so different.
Posted by Lucinda H. Kennaley at 2:05 PM

Well said! Love the new site...read this on my phone!

As always beautiful and provocative prose! And great information about Qatar! Write us a story about Qatarian sales people!