Bob and Cindi do Greece

Just one of many perks to life in Doha is the proximity to great travel destinations.  Last time, Bob and I did Rome.  This time, Greece. 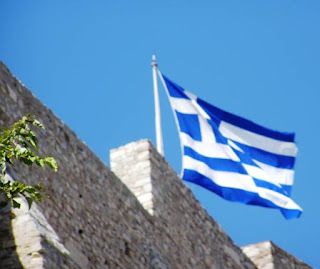 First a respite on an island called Karpathos.  Unless your Mom and Dad, like mine, stumble onto the calm, clear, clean water and spend the next six years getting to know its private beaches, coves and bays, you've probably never heard of Karpathos.  Don't expect me to tell you about the blue skies, rolling hills, or pristine, aqua hued water either.  Where you can swim out so far your husband waves his hands and exclaims, "Do you know how far out you are?" 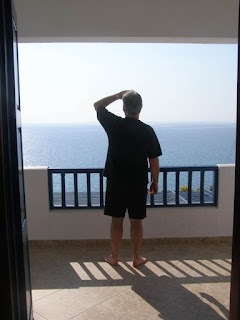 I'm not blogging about the sand and rock beach surrounded by green studded hills.  Or going on about peeking at topless women (and wishing you had the nerve to go for that all-over-tan yourself)... because all the tourists (when you see tourists) here are from Europe and nobody wears clothes in Europe if they don't want to.  Or how later, the proprietor of the cute-little-out-of-the-way-studio-hotel whips up calamari, fava beans, fasolakia and more, which you eat on a patio just below your private outdoor space...and listen to water lap at the beach a quarter mile away (that's just how still the dark is).  And cliché though it may be: the stars glitter in a slate sky and, oh!  The moon!

I'm just not going to tell you about it. 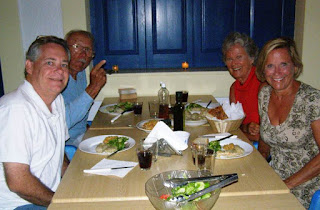 Because part of the island's charm is the seeming absence of tourists.  Karpathos is calm, peace, sunshine, sand, hiking.  It's listening to Mom and Dad speak German to the Austrians and Germans and Greek to the Greeks (you answering in Arabic because too many languages at once is confusing).  It's refilling water bottles from a mountain spring and a trek into the clouds via winding, queasy-producing narrow strips of no-barrier-sheer-cliffside-roads to tour Olympus, a village built on the side of a mountain 2,000 years ago.  Where residents dress in traditional clothes and give you food and tea. 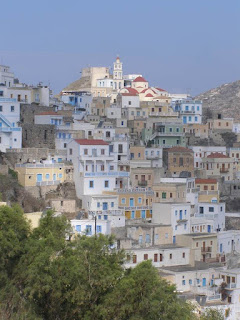 If I told you about Karpathos you'd want to go there.  And once there, you wouldn't want to leave.  But you would, eventually - because the next stop is Athens. 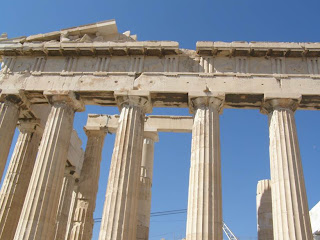 Athens is the Acropolis, of course.  Parthenon. Athena.  Zeus's Temple, Zeus's Cave and Mountain of the Muses. The Stoa of Attalos with its unfinished statues and busts. Tall, short, broken, repaired columns and headless women with monstrous sized feet.  Pebbles, stones and boulders.  Stacks and piles and shelves and mounds of rocks. 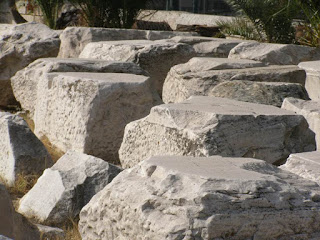 Slabs of marble, inscribed, plain, whole and broken.  How exactly did you think those columns have stayed put all these years?  The very mountains are made of marble. Narrow streets, plakas, churches, shops, and everywhere you turn, all hours of the day and night - the Parthenon is right there, high on that mountain, standing sentry above you. 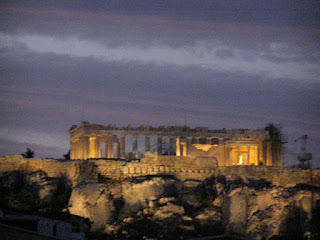 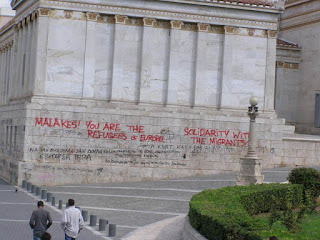 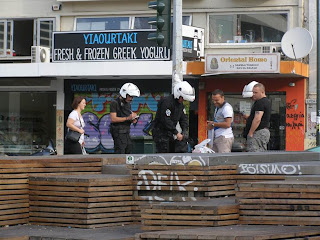 Women huddle in church vestibules with sleeping babies across laps, and beg.  Barefoot men crouch in the train station under blankets and ratty sleeping bags, money tins ready.  Twenty-somethings wearing rags and what you hope are on-purpose dreadlocks play music in the park for coins.  Waiters shoo beggars from café tables. Stray cats - and dogs! - wander in and out of archaeological sites and restaurants.
And yet, at night crowds gather in the plaka to listen to a live band sing Elvis hits under that amber-lit Parthenon.  Children play accordion for Euros and vendors tote evil-eye beads and baskets and golden (Greek Orthodox) chalices.  Tourism exists in Athens - it always will.  But now foreigners wear canvas satchels over chests instead of down backs, eye police and head back to hotels early.
But, heck, we do that in Doha too.  Which is where this blog ends and the next story begins. Because, right now, for us, just for a time - all roads lead back to Doha. 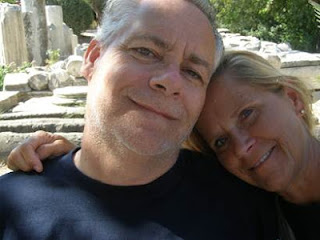 Posted by Lucinda H. Kennaley at 1:15 AM

You write so well! Thanks for sharing, what will be your next destination? You should visit Italy's Amalfi Coast. Vesuvius, Pompeii, and Herculaneum...another parthenon. :) It's another beautiful place. Love AK

It's interesting to see Karpathos and Athens through your eyes. And an incredible experience to share those days with you and Bob. Now, ...on to Doha, and Springfield, Missouri, USA. Looking for your next story, and happy to be players in this one. Love, Mom

It was a GREAT TRIP!! I sure come from well travelled stock. :)